The 24-hour sale on Wednesday by e-commerce giant Alibaba, the world’s biggest online retailer, broke its own record, with more than $1.5bn worth of goods sold within the first 12 minutes after trading began at midnight on Tuesday.

A little over 12 hours after the promotion’s start, sales had already outstripped last year’s $9.3bn record. By around 10pm, shoppers had splashed out almost $13bn, according to a company blog.

In constrast, desktop sales for the five days from Thanksgiving through to Cyber Monday in the US last year stood at $6.56bn, according to internet analytics firm comScore.

Singles Day is not a traditional Chinese festival, but Alibaba has been pushing November 11 since 2009 in a bid to tap the country’s huge, and expanding, army of internet shoppers.

The shopping event was first marketed as an “anti-Valentine’s Day,” featuring hefty discounts to lure singletons and price-sensitive buyers.

But with sales hitting new highs year after year, it has become a massive – and highly lucrative – business opportunity.

Singles Day has received vocal support from the government at a time when China’s economic expansion is slowing and Beijing is trying to transform its growth model into a more sustainable, consumer-driven one.

Chinese Premier Li Keqiang’s office phoned Alibaba chairman Jack Ma hours ahead of the promotion, “congratulating and encouraging the creation and achievement of the 11.11 event,” said a post on a social media account of Tmall, the group’s business-to-consumer arm.

The mega-spending spree came as the government announced industrial output growth had fallen to 5.6 percent in October, a six-month low.

The figure is the latest indicator that China’s expansion is slowing after years of breakneck growth.

“Chinese consumption is holding up reasonably well at the moment,” he said. “I think every company needs to be taking online seriously.”

Alibaba said its logistical arm and its partners would use more than 1.7 million staff, 400,000 vehicles, 5,000 warehouses and 200 planes to handle deliveries of products. 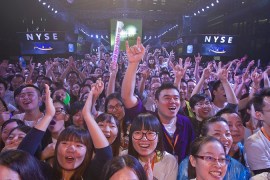