Saudi Arabia could burn through its financial assets within five years, as the country grapples with slumping oil prices.

The Middle East’s biggest economy is expected to run budget deficits of 21.6 percent in 2015 and 19.4 percent in 2016, according the IMF’s latest regional outlook.

That means Riyadh needs to find money to meet its spending plans. Just like its oil exporting neighbours, it plans to make substantial cuts to its budgets.

“For the region’s oil exporters, the fall in prices has led to large export revenue losses, amounting to a staggering $360bn this year alone,” Masood Ahmed, the IMF’s Middle East director, told reporters in Dubai.

There has been a trickle of evidence over the last few months that not all is well inside the kingdom.

The Saudi Arabian Monetary Agency has withdrawn $70bn in funds managed by overseas financial institutions. Its foreign reserves have fallen by almost $73bn, since oil prices slumped, leaving it with $654.5bn.

But with a debt-to-GDP ratio of two percent, there is plenty of room for the country to borrow money to fund its growth. 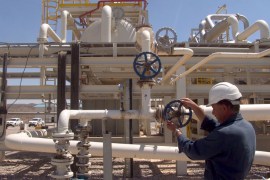 Riyadh rejects criticism over its decision to let oil prices slide, saying drop is due to supply and demand factors.