The president on Tuesday called for a “responsible dialogue” between managers and trade unions over proposed job cuts at the company.

“Social dialogue matters, and when it’s interrupted by violence and disputes take on an unacceptable form, it can have consequences for the image and attractiveness [of the country],” said Hollande.

Air France-KLM’s human resources manager Xavier Broseta had his shirt ripped off and had to clamber over a wire fence to safety after hundreds of striking workers stormed a board meeting on Monday in protest over plans to cut 2,900 jobs.

Another executive, Pierre Plissonnier, who is responsible for the long-haul flight division, had his shirt and jacket torn in the scrum, the AFP news agency reported.

The loss-making airline, which employs 52,000 people, is struggling to compete in the face of fierce competition from global rivals.

Instead, the company has now proposed the job cuts, along with a reduction in long-haul flights, selling 14 planes and possibly cancelling some of the new Boeing 787s it has on order. 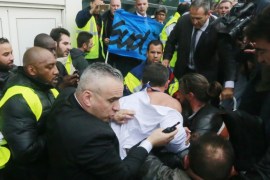 Hundreds of protesters storm meeting with bosses on job cuts and attack two managers who flee under police protection. 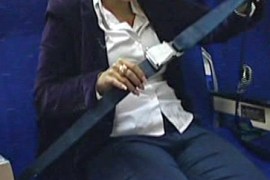 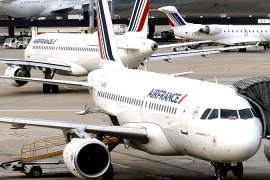