Tripoli, Libya –  Amal, a mother of five children, crouches over a sewing machine within the maze of whitewashed alleys in Tripoli’s dilapidated old city, its ancient walls abutting the Corinthia Hotel compound.

The light in her dingy tailor shop has been on for most of the day, a rarity for the impoverished neighbourhood, which has been plagued with hours-long electricity cuts, skyrocketing food prices and crime.

“We hear gun shots everyday and we are tired,” said Amal, nostalgic for the security she says she had before Muammar Gaddafi’s overthrow in 2011.

While Libya’s two competing governments continue to battle over power, territory and the country’s oil wealth, against the backdrop of controversial United Nations-brokered peace negotiations in Geneva, it’s the ordinary Libyans across the country that are paying the highest price.

“Of course I’d be happy if the two governments were unified. But they want the power, money and the country, so I think this will be [only] resolved by fighting.”

About 600 people have been killed in three months of heavy fighting between Libyan pro-government forces and Islamist groups in Libya’s second-largest city, Benghazi, medical staff have said.

The high-profile attack on the luxury Corinthia Hotel in downtown Tripoli on Tuesday, which has been mostly empty in recent months except for a handful of guests and businessmen, is the latest ominous sign of Libya’s slide into violence and economic chaos.

Fighters allied with the Islamic State of Iraq and the Levant (ISIL) have claimed responsibility for the attack. The Tripoli-based “Libya Dawn” coalition, however, blamed Gaddafi loyalists instead, which essentially means former General Khalifa Haftar’s forces, commonly known as “Operation Dignity”, in the east of the country.

The country's two main forces realised they were in a stalemate, and that the fighting wasn't allowing either to gain a decisive upper hand without going after oil infrastructure.

Libya has been sliding deeper into conflict since the 2011 uprising, with rival governments and powerful militias battling for control of its main cities and oil wealth.

Recent calls for a ceasefire have failed. Fighting continues to rage between Libya Dawn, affiliated with Prime Minister Omar al-Hassi and the General National Congress (GNC), and Operation Dignity forces led by Haftar, and allied with exiled Prime Minister Abdullah al-Thinni and the House of Representatives (HoR) in Tobruk and Beida.

Battles in Benghazi and the east, in the west, around the oil-rich Gulf of al-Sidra, and in the southern town of Ubari, have forced an estimated 400,000 people to flee their homes, according to the United Nations Refugee Agency.

In Libya’s southern desert, at the vast Sharara oil field, capable of generating up to 300,000 barrels of oil a day, all production has grounded to a halt.

On November 5, when Libya Dawn forces from Misrata teamed up with local Tuareg fighters to wrest the facility from its Zintan and Tebu security guards, the Zintan forces blocked the oil pipeline to the Zawiyah refinery on the coast.

Last summer, Misrata militia seized Tripoli’s international airport from the Zintan, and battles between them continue in the west, and between Libya Dawn and Operation Dignity forces around al-Sidra oil terminal to the east.

“The country’s two main forces realised they were in a stalemate, and that the fighting wasn’t allowing either to gain a decisive upper hand without going after oil infrastructure,” said Richard Mallinson, an analyst with the UK consultancy Energy Aspects.

“That can only point to escalation once you’ve opened the door to assets and infrastructure. But what is unclear is whether each side has the military ability or international legitimacy to assert itself across the whole country,” he said.

“That creates space for small and more extremist groups to thrive, which is a concern for regional stability.”

Snipers in nearby Ubari have blocked the road into Sharara, and all supplies for the facility’s skeleton crew have to be flown in. Gasoline is scarce and expensive, and can only be trucked to the oil field and Libya’s southwestern towns across desert dunes.

Heavily subsidised by the government, gasoline officially costs 0.15 Libyan dinars ($0.11) per litre at the pump. But many petrol stations are rarely open, and black market gasoline prices in remote desert towns like Murzuq and Ghat run about seven times the cost, boosting the price on transport and goods.

“There is no gasoline here,” said Abdullah Othman, a Tuareg community leader in the town of Ghat near the Algerian border. “So there is no electricity, no healthcare or town services.”

He estimates that around 70 percent of gasoline for domestic use is now imported.

The Central Bank of Libya has warned that total revenues last year were $15.5bn against $34.1bn in spending, leaving a $18.6bn deficit. The government has vowed to cut subsidies on petrol and food, and enact austerity measures on a population heavily dependent on government pay.

Many salaries remain unpaid, crowds shove each other at banks for cash withdrawals, and in some cases, money has to be flown across the desert to reach certain communities.

In the shadow of the historic Central Bank building on Tripoli’s harbour is a collection of trading shops for gold and currency. The Libyan dinar has lost nearly half its value, plummeting to less than half a US dollar, while the cost of chunky gold bars has increased.

“To tell you the truth, nowadays I’m nervous about putting money in the bank,” said Mustafa Badr, a currency trader. “But if people start to withdraw a lot, they could be robbed. Then this would become normal.”

Down the block, Ali Nefatti, a 22-year-old student, works at a gold jewellery shop when he’s not at the Tripoli University. He says business has been bad because the traditional jewellery, mostly worn at weddings, is not essential for people now.

“Each side needs the power, and so they will finish it by fighting,” he sighed. “I’m going to work, get money and go abroad. Most of my friends want to go abroad. We are fed up with all the fighting. Everything is wrong here. We need security and we need peace.” 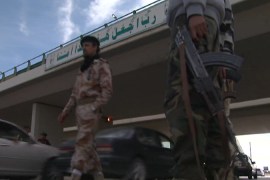 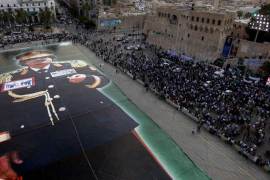 Libyan capital hit by series of blasts thought to be the result of NATO airstrikes.