The Greek Prime Minister Alexis Tsipras has relented on most of the demands made by the country’s creditors in order to secure a rescue package, according to a report by the Financial Times.

The British newspaper said it had obtained a letter by the leader to creditors sent on Tuesday night, just before Greece missed a debt repayment to the International Monetary Fund (IMF), after its Eurozone bailout programme expired on the same day.

The letter, which was written to the heads of the European Commission, IMF, and European Central Bank (ECB), explains Greece’s conditions for a new bailout worth $33bn.

The paper cites senior eurozone officials who say the remaining conditions remain an obstacle to a new deal.

The report came as crowds of Greek pensioners queued outside banks since dawn Wednesday in order to withdraw limited amounts of cash and EU finance ministers prepared for fresh talks on a new bailout deal for the southern European nation.

The Greek government has allowed elderly residents without bank cards to withdraw $134 from their accounts, leading to often chaotic scenes on Wednesday, just hours after the country failed to make a debt repayment to the International Monetary Fund (IMF).

The missed IMF payment cut off Greece from vital financing and pushed it one step closer to leaving the euro. The IMF cannot lend money to a country that is in arrears.

The eurozone’s finance ministers are set to weigh a last-minute Greek proposal for a new aid program, submitted Tuesday afternoon, in a conference call later Wednesday.

The Greek request for $33bn from the European Stability Mechanism (ESM) is aimed at fully covering its “financing needs and the simultaneous restructuring of debt” for the next two years, according to the office of Prime Minister Alexis Tsipras, the AFP news agency reported.

Greek officials had indicated they would be willing to suspend a referendum planned for Sunday on the reforms demanded by creditors if Wednesday’s talks produce an eleventh-hour agreement on the new funding request.

European officials and Greek opposition parties have been adamant that a “No” vote on Sunday will mean Greece will leave the euro and possibly even the EU. The government rejects the argument as scaremongering, and says dismissing creditor demands will mean the country is in a better negotiating position.

“They say he’s playing a dangerous position and putting his party’s interests above his country,” Phillips said.

Greece has debt worth nearly 180 percent of its GDP after receiving two bailouts worth $266bn since 2010.

Unemployment has more than doubled since 2009 to 25.6 percent and pensions and benefits have roughly halved between 2010 and 2014. 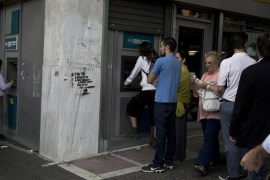 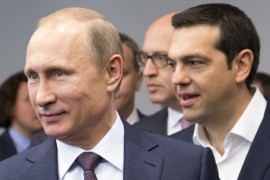 Political fears of a Russia-Greece axis are groundless

Moscow has no interest in bailing out bankrupt Greece – even if it could.