Thousands of people have rallied in front of parliament in Athens, in support of Greek Prime Minister Alexis Tsipras, who presented new proposals to European leaders on Sunday aimed at ending his country’s debt crisis.

Greece is set to join summit of Eurpean leaders in Brussels on Monday to help secure a debt deal with its international creditors.

They want to humiliate us, why else do they insist on all these measures? We will not tolerate it any more

The country has until the end of the month to repay a $1.8bn loan or risk leaving the single currency and even the EU.

The Greek government says it’s optimistic, but many Greeks are concerned that the country’s economy is now well beyond its control.

Sunday’s demonstration by supporters of Tsipras’s ruling Syriza party and others opposed to the euro, was the second anti-euro rally in a week in the Greek capital.

Protesters called to resist pressure from international creditors to accept more austerity in exchange for unlocking billions of euros in bailout funds.

More than 7,000 people took to the streets carrying banners that read “A different Europe with Tsipras” and “You can’t blackmail the people, the country is not for sale”.

Singing, waving Greek flags and banners with slogans such as “No to the euro”, “The People will not be blackmailed” and “The country’s not for sale”, several thousand people filled the street in front of parliament.

“They want to humiliate us, why else do they insist on all these measures? We will not tolerate it any more,” said 65-year-old former teacher Yiota Kananakari.

Solidarity demonstrations were also held in Brussels as well as Amsterdam.

“It’s not people pulling out savings from banks because they don’t know whether those banks are going to be shut on Monday morning,” Al Jazera’s John Psaropoulos, reporting from Athens, said.

With speculation over Greece’s future in the euro intensifying, a counter-rally urging the country to remain in the single currency was held last week, with another scheduled to be held on Monday.

The flurry of diplomatic contacts came as Athens scrambled to reach a deal with its eurozone lenders after five months of deadlock, with Tsipras also scheduled to meet the leaders of its IMF, EU and ECB creditors on Monday before the summit.

Athens said its new proposals were aimed at reaching a “definitive solution” to end the standoff between Athens and its creditors as fears deepened over a potential “Grexit” from the eurozone.

The heads of the 19 eurozone countries will hold the emergency summit under pressure to prevent Greece from defaulting on its debt with a June 30 payment deadline fast approaching.

Separately, the European Central Bank’s governing council will also meet on Monday morning to discuss whether to raise the level of emergency funding to Greek banks yet again, after the country’s banking system came under intense pressure this week with clients withdrawing massive sums in savings. 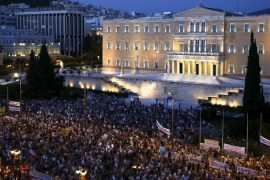 Emergency funding believed to be worth $3.4bn promised after fears of exit from euro leads to a run on banks. 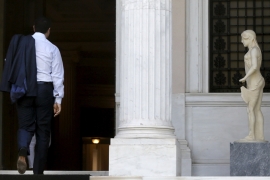