Japan’s economy has rebounded out of recession in the last quarter of 2014, according to official data, but growth and internal spending have been weaker than expected, underlining the challenge the government faces in shaking off decades of stagnation.

The year-on-year 2.2 percent expansion in October-December was smaller than a 3.7 percent increase forecast in a poll by the Reuters news agency, suggesting a fragile recovery as the hangover from last year’s sales tax hike lingered.

However, over the full calendar year the preliminary data showed zero growth, compared with 1.6 percent expansion in 2013. Revised figures will be released in the following weeks.

The US economy grew at its fastest pace in four years in 2014, expanding 2.4 percent.

Economic Minister Akira Amari told reporters after the data’s release that the economy was on track for a recovery with signs consumer sentiment is picking up.

The data will be one of the key factors the bank will scrutinise at its two-day rate review ending on Wednesday, where it is widely set to maintain the current pace of asset purchases in its monetary stimulus programme.

Private consumption, which makes up about 60 percent of the economy, rose 0.3 percent in the final quarter, less than a median market forecast for a 0.7 percent increase.

In a glimmer of hope, external demand added 0.2 percentage point to growth on robust shipments to the US and China, Japan’s two biggest export destinations.

One of the biggest headwinds for Japan is a deteriorating global economic outlook, which has triggered a wave of monetary easings around the world to fight deflationary pressures and prop up growth.

However, Japanese policymakers are hoping a rebound in exports, which had been a soft spot in the economy despite support from a weak yen, and lower fuel costs will encourage firms to spend more on wages and expenditure. 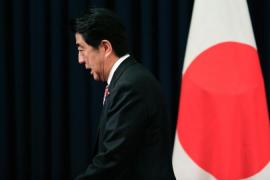 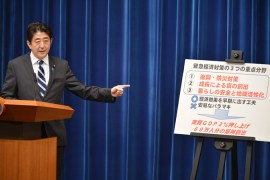 The new measures approved by the cabinet aim to lift the economy out of recession and create 600,000 new jobs.