With polls closed and more than half of the votes counted on Saturday, Key’s centre-right National Party had 49 percent of the vote, while its closest rival, the liberal Labour Party, had just 24 percent.

David Cunliffe, the Labour leader, conceded defeat, admitting his centre-left party could not form a government.

“I have called John Key and congratulated him and acknowledged he will continue to be prime minister of New Zealand,” Cunliffe said.

Should the results hold, Key would return to power with a government that has a similar look to the existing one.

Early voting indicated several coalition options for Key, and even the possibility that his party could govern outright – something that has never happened since the proportional system was introduced in 1996.

In the last election three years ago, the National Party won 47 percent of the vote.

Supporters say Key’s party has managed New Zealand’s economy well during its six years in office. The economy has been growing at a four percent clip, while unemployment has dropped to 5.6 percent. 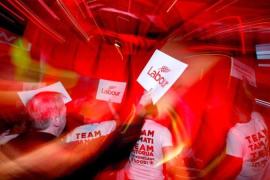 New book based on emails hacked from the computer of a government supporter is adding a twist to September 20 election.