For the third straight year hundreds of workers, and protesters supporting them, demonstrated on Friday outside thousands of stores, accusing the country’s largest private employer of paying wages below living standards.

I work 40 hours a week and per year I haven’t made over $25,000 so I’m still relying on government assistance.

The US federal government requires a baseline hourly wage of $7.25, although the actual wage depends on each state.

With gross profits of $130bn in 2014, Walmart has been a ripe target for the movement to pass living wage laws across the US, Ackerman said.

Demonstrators contend that, even working full-time, Walmart employees need government subsidies to make ends meet, while the company’s owners have become rich off the back of huge profits.

According to  Forbes magazine, the publicly-listed firm’s largest stockholders include members of the Walton family, who are listed as the world’s wealthiest individuals collectively with an estimated worth of $150bn.

“I work 40 hours a week and per year I haven’t made over $25,000 so I’m still relying on government assistance,” Melinda Gaino, a Walmart worker, told Al Jazeera.

Ned Measel, another employee, said that despite working 40 hours a week, he does not earn enough to pay his rent.

“I can’t get my car fixed, I wait for shut-off notices from utilities before I can pay them,” he said.

In a statement sent to Al Jazeera, Amanda Henneberg, a Walmart spokeswoman, described those who participated in the protests as “paid union demonstrators”.

She said they did not represent the over one million employees of the company.

“It’s unfortunate that this group attempts to disrupt the holiday spirit to push their agenda. The reality is that Walmart is focused every day on providing our associates with opportunities for job growth.”

While the demonstrators marched outside, the company put forward a few workers inside the stores to give the media its side of the story.

At most, only a few hundred of Walmart’s 1.4 million employees were expected to stay away from work as part of the protests, making limited impact on Black Friday, when millions of Americans flock to the malls to shop.

Those who did join in the demonstration said they feared the company would retaliate by telling them not to bother coming back.

Since 2005, Black Friday has held the crown as the top sales day of the year in the US, according to ShopperTrak, which tracks data at 70,000 stores globally.

Bill Martin, co-founder of ShopperTrak, said Black Friday sales will be in the $9bn range. 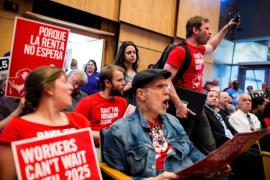 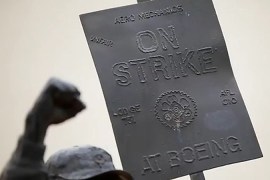 The decline of labour unions in the US

Labour unions are under fire across the US, but do they have enough vitality to fight back? 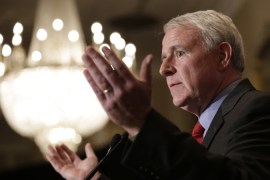 A body blow for the US labour movement

The recall election in Wisconsin left Democrats and liberals under pressure ahead of November’s presidential ballot.