Standard & Poor’s has cut Argentina’s credit rating, saying the country was more likely to default after the US Supreme Court rejected its appeal to avoid paying certain bond investors.

The American credit rating agency said on Tueday that the downgrade “reflects the heightened risk of default” on Argentina’s foreign currency debt.

Earlier, President Cristina Fernandez said that her government will honour its payments to holders of its restructured debt to avoid a default, despite suffering a setback in its long-running legal battle against “holdout” investors.

Just hours after the US Supreme Court refused on Monday to hear an Argentinian appeal aimed at staving off a default, Fernandez criticised US courts for repeatedly ruling against her government.

Owners of more than 92 percent of the bond holders agreed to accept new bonds worth much less than their original face value in 2005 and 2010 debt swaps, but investors led by Paul Singer, a New York billionaire, held out and litigated instead, seeking to force Argentina to pay cash in full plus interest.

Fernandez said Argentina was the victim of “extortion” by holdouts who refused to join debt restructuring deals since the catastrophic 2001-02 default on $100bn of sovereign debt.

US District Courts ordered that the $1.5 bn sum be paid “all together, without quotas, right away, now, in cash, ahead of all the rest” of bond-holders, Fernandez said.

Fernandez said that she was still open to negotiations and insisted she would continue to pay the more than 90 percent of creditors who accepted a renegotiation of the defaulted debt.

“Argentina will fulfil its obligations and it will not default on its restructured debt,” she said in a televised speech.

The bonds were picked up by international creditors after the country’s 2001 default.

The consequences of not paying the bond holders could be catastrophic for a Argentina’s fledgling economy, hampered by a devalued currency.

If Argentina does not hand over a $907m portion to the plaintiffs in the next two weeks, the judge will order US banks not to process future Argentina bond payments. The action could isolate Argentina from US currency and force the country to default once more.

Argentina’s markets were already reflecting fear of a potential default. The Merval stock index dropped 11 percent after the court decision, its largest one-day loss in more than six months, and the value of Argentina’s currency plunged 33 percent on the black market.

Fernandez urged her countrymen to “remain tranquil” in the days ahead.

Bowing to the US courts would force her to betray a core value that she and her late husband and predecessor, Nestor Kirchner, promoted since they took over the government in 2003: Argentina must maintain its sovereignty and economic independence at any cost.

Fernandez expressed fear that settling with the plaintiffs could allow other bond holders who held out on debt swaps to make claims, costing Argentina up to $15bn.

The plaintiffs said her government needs to settle now. 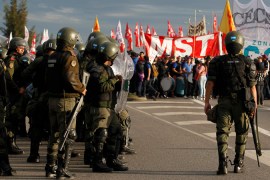 In Argentina, getting by is getting harder

After years of rapid growth, Argentina is bracing for another economic crisis as inflation eats up purchasing power. 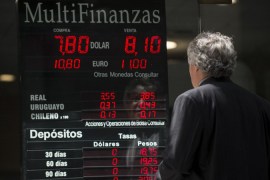 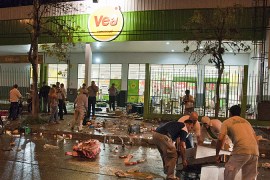 Reflection in Argentina after deadly looting

Argentina is left soul searching after a wave of violent looting killed 13 as police went on strike for higher pay. 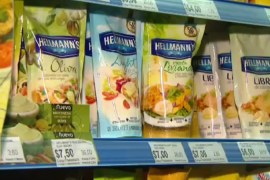 Government to freeze prices of many products found in grocery stores as country grapples with soaring inflation.