Workers in Greece are staging a 24-hour nationwide strike as unions called for protests against the latest round of austerity measures.

Trains ground to a halt and hospitals worked with emergency staff as strikers took action against plans to fire thousands of public sector employees.

Representing about 2.5 million workers, private sector union GSEE and public sector union ADEDY have brought workers to the streets repeatedly since Greece slid into a debt crisis in late 2009.

The latest strike comes a day before a parliamentary vote on Wednesday on reforms Athens agreed with its European Union and International Monetary Fund lenders as a condition for $8.9bn in aid.

Among the measures included in the bill are job cuts for teachers, municipal police and local government posts.

Flights to and from Athens were disrupted as civil aviation unions staged a four-hour work stoppage in solidarity.

City transport was also affected, with bus and trolley bus drivers holding work stoppages in the morning and in the evening.

Al Jazeera’s John Psaropoulos, reporting from Athens, said that there are abo

Psaropoulos said that unions connected to tourism were particularly on strike, which led buses to stop operations and flights to be cancelled or delayed.

“It’s an attempt to hurt government where it hurts. In other words, in the tourism industry which is actually going relatively well this year,” he said.

“But the real pain to be felt here is among municipal and local government workers, about 8,000 of whom expect to lose their jobs over the next six months.

“They do not trust the government, they think they are eroding workers rights, that is why this is something that should concern public sector as well as the private sector,” our correspondent said.

More than a week of marches by municipal workers are expected to culminate in a rally before parliament in the capital, with rubbish collectors, bus drivers, bank employees and journalists among the groups joining the walkout.

“We are continuing our fight to put an end to policies that annihilate workers and drive the economy to an even greater recession,” said the GSEE in a statement.

“We will stand up to those who, with wrong and dead-end choices, have driven the Greek people to poverty and despair.”

The visit of German Finance Minister Wolfgang Schaeuble to Athens on Thursday is also expected to draw protests from Greeks who blame Berlin for being behind austerity policies that have shrunk pay levels and boosted unemployment.

Greece’s lenders, which have bailed it out twice with 240 billion euros in aid, have grown impatient with the slow progress it has made in streamlining a 600,000-strong public sector widely seen as corrupt and inefficient.

But with unemployment at an all-time high and at twice the eurozone average, many Greeks are furious at plans to put 12,500 workers into a “mobility pool” by September, giving them eight months to find work in another department or get fired.

About 25,000 workers will be placed in the scheme by the end of the year. 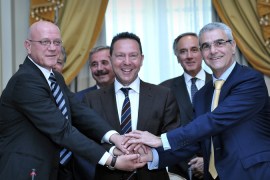 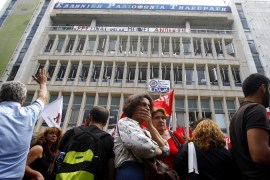 International creditors say country’s finances improving but more needs to be cut in the future. 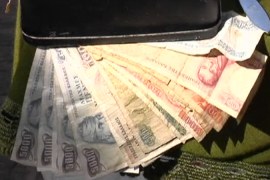 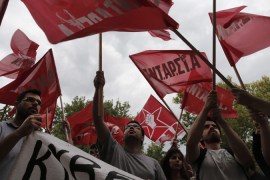