Demonstrations have taken place across the world as protesters gather to mark May Day, the traditional date for demanding better workers’ rights.

Hundreds of thousands of Cubans turned out for one of the world’s largest parades in capital Havana on Wednesday, carrying banners and flags in celebration of workers’ rights and in support of the ruling Communist Party.

This year’s march is dedicated to the recently deceased Venezuelan leader Hugo Chavez, who was an ally of Cuba, and who had provided a lifeline for Cuba’s government during recent hard economic times.

In Venezuela, tens of thousands of people both from the government and the opposition staged rival marches in Caracas, just hours after a brawl in the legislature injured several opposition lawmakers.

In the United States’ third largest city of Chicago, May Day marchers called for end to deportations of undocumented immigrants. Unlike in the past however, the march only attracted at least a thousand protesters.

Protests first began in Asia, with tens of thousands of workers in Jakarta calling for improved conditions and mobilising against government plans to cut fuel subsidies.

More than 20,000 people flooded the capital, angered by President Susilo Bambang Yudhoyono’s announcement on Tuesday to raise price of fuel.

With 80 countries around the world marking May 1 as a public holiday, Istanbul’s Taksim Square was in lockdown on Wednesday, after the Turkish government banned May Day protests there.

The square is the site of a 1977 May Day massacre in which dozens of people died under disputed circumstances.

Al Jazeera’s Hashem Ahelbarra, reporting from Istanbul, said: “There have been scuffles, particularly in areas that lead to Taksim Square, which has been sealed off.

“Protesters say they should be given access to celebrate May 1 in a place of symbolic importance; they want to honour the memory of those who were killed here. There is a tug of war under way between the government and people.”

Organisers said about 5,000 demonstrators, including union workers, gathered for the rally, chanting slogans and holding banners.

Protesters came from 16 unions and associations in Cambodia to mark International Labour Day and urge whoever wins the general election in July to meet their demands.

“I demand that my pay is increased to $150 per month,” said garment worker Neang Leakena, from the Chinese-owned Deum Por garment factory.

In the Philippines, thousands of contract workers marched through the streets of the capital, Manila.

Banned from forming labour unions, the workers demanded that the government strengthen their rights.

In Athens, Greece’s capital, the main public and private sector unions called a 24-hour strike to protest against the government’s austerity policies.

Greece has had to enforce tax rises and spending cuts as part of deals with the International Monetary Fund and its eurozone partners to overcome a crippling debt crisis.

On Sunday, parliament approved a bill which will leave 15,000 civil servants out of work by the end of next year.

Other groups, including the Communist Party, are holding gatherings of their own. Up to 90,000 people are expected. 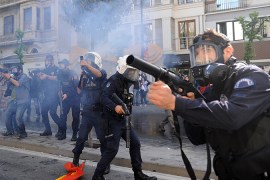 Many injured as riot police use tear gas on demonstrators defying ban on holding rally in Istanbul’s Taksim Square. 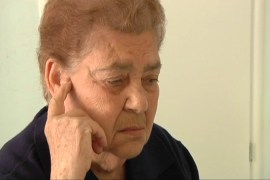