Tens of thousands of Greeks have taken to the streets of Athens and other cities as part of a nationwide strike against austerity that confined ferries to ports, shut schools and left hospitals with only emergency staff.

Beating drums, blowing whistles and chanting “Robbers, robbers!” more than 60,000 people angry at wage cuts and tax rises marched on Wednesday to parliament in the biggest protest for months over austerity policies required by international lenders.

In the capital, riot police fired tear gas at hooded youths hurling rocks and bottles during a demonstration, mostly of students and pensioners, which ended peacefully.

The two biggest labour unions brought much of crisis-hit Greece to a standstill with a 24-hour protest strike against policies which they say deepen the hardship of people struggling through the country’s worst peacetime downturn.

Representing 2.5 million workers, the unions have gone on strike repeatedly since a debt crisis erupted in late 2009, testing the government’s will to impose the painful conditions of an international bailout in the face of growing public anger.

“Today’s strike is a new effort to get rid of the bailout deal and those who take advantage of the people and bring only misery,” said Ilias Iliopoulos, secretary general of the ADEDY public sector union, which organised the walkout along with private sector union GSEE.

“A social explosion is very near,” he told the Reuters news agency from a rally in a central Athens square as police helicopters clattered overhead.

The eight-month-old coalition of Prime Minister Antonis Samaras has been eager to show it will implement reforms promised to the European Union and International Monetary Fund, which have bailed Athens out twice with over 200 billion euros.

The government has cracked down on striking workers, invoking emergency laws twice this year to get seamen and subway workers back to work after week-long walkouts that paralysed public transport in Athens and led to food shortages on islands.

Labour unrest has picked up in recent weeks. A visit by French President Francois Hollande in Athens on Tuesday went largely unreported because Greek journalists were on strike.

“The period of virtual euphoria is over,” said opposition leader Alexis Tsipras, whose Syriza party has regained a narrow opinion poll lead over the governing conservatives.

“Those who thought Samaras would renegotiate the terms of the bailout … are now faced with the harsh reality of unpaid bills, closed shops and lost jobs,” he said.

Anger at politicians and the wealthy elite has been boiling during the crisis, with many accusing the government of making deep cuts to wages and pensions while doing too little to spread the burden or go after rich tax evaders.

“This government needs to look out for us poor people as well because we can’t take it any more,” said Niki Lambopoulou, a 43-year-old insurance broker and single mother.

“I work night and day to make ends meet and the government is killing our children’s dreams.”

Greece secured bailout funds in December, ending months of uncertainty over the country’s future in the eurozone, and
analysts said this had created expectations among Greeks that things would improve for them personally.

“If these expectations are not satisfied by the summer, then whatever is left of the working class will respond with more
protests,” said Costas Panagopoulos, head of Alco pollsters.

Six years of recession and three of austerity have tripled the rate of unemployment to 27 percent. More than 60 percent of young workers are jobless. 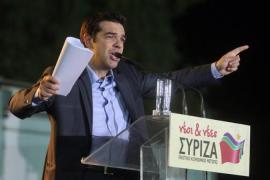 European authorities still punishing Greece – can they be stopped?

The so-called troika’s fiscal plans for Greece are the cause of its economic depression, not the solution. 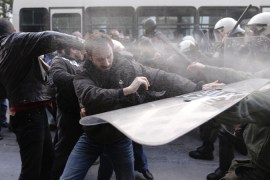 Police force demonstrators out of government building, leading to clashes and the arrest of 30 people, many union heads. 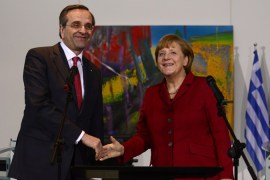 New tax law, demanded by EU and IMF, includes top rate of 42 percent for Greeks earning more than $56,000 a year.