Qatar’s construction sector is rife with abuse, Amnesty International, the international rights organisation, has said in a report, and has urged the Gulf Arab country to enforce existing labour protections flouted by many employers.

The 169-page report, The Dark Side of Migration: Spotlight on Qatar’s Construction Sector Ahead of the World Cup, released on Sunday in Qatar’s capital, Doha, said workers were subjected to non-payment of wages and harsh working conditions.

The report, based on interviews with workers, employers and government officials, documents the scale of exploitation of migrant workers as construction for the 2022 FIFA World Cup begins.

Salil Shetty, secretary-general of Amnesty International, called on FIFA to act more urgently in pressing Qatar over the issue.

“It is simply inexcusable in one of the richest countries in the world, that so many migrant workers are being ruthlessly exploited, deprived of their pay and left struggling to survive,” he said  in Doha on Sunday night.

“This is a crisis situation.”

The report’s release comes one week after Francois Crepeau, UN Special Rapporteur on the Human Rights of Migrants, called called for more labour reforms in Qatar.

Shetty said Qatar’s government had taken important steps to address the issues of migrant workers and human rights in general, and it was likely that the labour minister would do something about the problem.

However, Shetty said that more needed to be done, including reforming the “kafala” sponsorship system, which binds workers to their employers, and ending the exit-permit system, where migrant workers must seek permission from employers to leave the country.

Qatar’s state cabinet has appointed a committee to examine the issue.

Shetty said senior Qatari officials, including the prime minister and labour minister, were unable to say whether they were going to abolish exit visas, in the immediate sense.

“I think they fully recognise that there is a problem which they have to address,” he said.

“I would say that they made a commitment.”

Khalid bin Jassim Al Thani, the director of the Human Rights Department in Qatar, said in a letter to Amnesty International, published as part of the report, that the law with regard to exit permits protected workers from “bad sponsors”.

“The employee can travel without permission if the objection of the sponsor was unreasonable,” he wrote.

The Amnesty International research team met dozens of construction workers who have been prevented from leaving the country for many months by their employers, leaving them trapped in the country.

James Lynch, one of the researchers, said there were now about 150 labour inspectors, but it was important that rogue employers were prosecuted.

He said he saw workers living in a camp with no running water or electricity for several weeks and had worked long hours, but were unpaid for about eight months.

“Their camp was full of rubbish,” he said.

“The septic tank had overflowed, so there was streaming sewerage flowing out into the street.”

Lynch said the company confiscated all of the men’s passports.

“The company said if you want to go home, you have to sign this document which says you have received all of your salaries,” he said.

“We actually watched a group of them sign those at the Ministry of Justice and they all got plane tickets in return, and I think the sheer injustice of that was quite shocking.”

He alleged passport confiscation was “rife”. 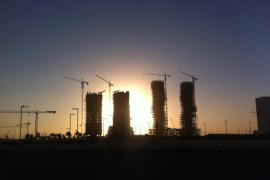 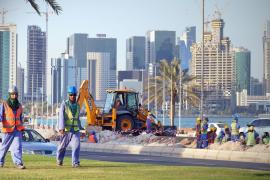 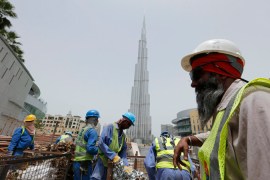 Dubai’s striking workers in their own words

Labourers at construction giant Arabtec in the UAE complain of low pay, poor conditions and lack of annual leave. 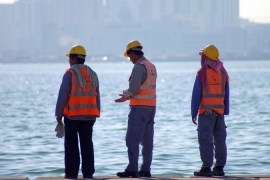