The US House of Representatives has passed the “fiscal cliff” bill, ending a months-long dispute over the measure that averts tax hikes and spending cuts.

The bill’s passage on a 257-167 vote in the House of Representatives on Tuesday evening sealed a hard-won political triumph for the president less than two months after he secured re-election while calling for higher taxes on the wealthy.

The legislation will now head to the White House for President Barack Obama to sign it into law.

The deal raises taxes on the wealthiest Americans and close a crucial chapter of the budget dispute that has consumed Washington for months.

Moments later, Obama strode into the White House briefing room and vowed to avoid a repeat of last year’s divisive fight with Congress over an extension of the nation’s borrowing authority.

“While I will negotiate over many things, I will not have another debate with this Congress about whether or not they should pay the bills they have already racked up,” Obama said in remarks in the White House.

The extraordinary late-night House vote took place less than 24 hours after the Senate passed the measure in the pre-dawn hours on New Year’s Day.

In addition to neutralising middle class tax increases and spending cuts that technically took effect on Monday at midnight, the legislation raises tax rates on incomes over $400,000 for individuals and $450,000 for couples.

The developments came after the House decided to not alter the bill, which would have complicated congressional passage of the measure.

Senate Democratic aides had said the Democratic-led Senate,  would not return to vote on an amended version of the bill.

Supporters of the bill in both parties expressed regret that the bill was narrowly drawn, and fell far short of a sweeping plan that combined tax changes and spending cuts to reduce federal deficits.

The bill would prevent an expiration of extended unemployment benefits for an estimated two million jobless, renew tax breaks for businesses and renewable energy purposes, block a 27 percent cut in fees for doctors who treat elderly Medicare patients, stop a $900 pay increase for lawmakers from taking effect in March and head off a threatened spike in milk prices.

Al Jazeera’s Tom Ackerman, reporting from Washington, DC, said that while the deal has helped alleviate concerns of an immediate economic nose dive in the US, it by no means solves the greater problem.

“In terms of actually putting a dent into the deficit, the deal did practically nothing, and in fact, taxpayers or wage earners will be seeing an increase in their taxes from the very beginning,” said Ackerman.

The bill would also raise the top tax rate on large estates to 40 percent, from 35 percent, and taxes on capital gains and dividends over $400,000 for individuals and $450,000 for couples would be taxed at 20 percent, up from 15 percent.

It would stop $24 billion in spending cuts set to take effect over the next two months, although only about half of that total would be offset with spending reductions elsewhere in the budget.

The agreement includes a balance of spending cuts and revenue increases to pay for the delay in the automatic spending cuts that would go into effect without a deal.

For all the struggle involved in the legislation, even its passage would merely clear the way for another round of controversy about the nation’s borrowing authority almost as soon as the new Congress convenes. 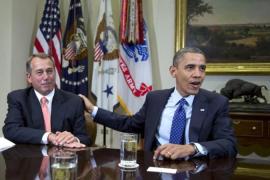 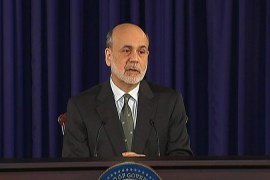 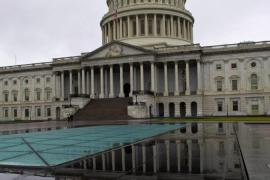 What is behind the US fiscal cliff standoff?

We ask if it is a real crisis or just political theatrics, and if the American polity is able to govern the country. 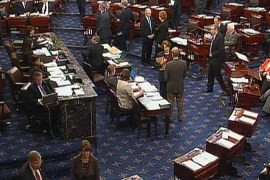 Republican-controlled House of Representatives considers Senate bill, including series of tax hikes for the wealthy.