France’s Socialist President Francois Hollande pledged 30 billion euros in new taxes and savings to balance the budget and fund a turnaround in two years, and rejected criticism of dragging his feet.

The pledge, made to the nation in a prime time television interview, comes four months into his presidency as tumbling ratings and talk of inertia have forced him to become more proactive on the economy.

“I am in a battle and will not look back,” he said. “I am setting up a calendar … two years to create a policy for work and competitiveness. I am accelerating,” he said.

Hollande’s remarks were clearly aimed at turning around perceptions that he is not moving fast enough.

“I know where I am going. I will assume all the responsibility and I will talk regularly to the French people,” he said.

He also said a 75 per cent wealth tax on incomes more than one million euros ($1.28 million) would not be diluted.

Hollande, whose immediate challenge will be to find $38.40bn in savings in the 2013 budget, said the government would lower its growth forecast to 0.8 per cent from 1.2 per cent for next year.

Hollande – who has famously said he does not “like the rich” – said $10bn would come from additional taxes on households “especially the well-heeled”, 10 billion more from businesses and 10 billion from savings in government spending. It would be the biggest hike in three decades.

The budget is expected to be the most austere in 30 years as France tries to hit a deficit target of 3 per cent of gross domestic product next year, or risk losing investors’ trust.

It will be presented at a September 28 Cabinet meeting, which has been pushed back by two days to allow for Hollande’s trip to the United Nations’ General Assembly in New York.

Having won a May election with 51.6 per cent of the vote, Hollande’s ratings have slid below 50 per cent in less than half the time it took Sarkozy to fall from favour.

A BVA poll published for Le Parisien on Sunday suggested that almost 60 per cent of French people are “relatively unhappy” with the president’s start compared with 34 per cent on May 31. A second survey from pollsters Opinionway indicated his popularity rating falling 14 points to 46 per cent since June.

Hollande said he expected unemployment, which is at 13 year highs, to begin to fall within a year as his proposals to create 80,000 subsidised jobs and to hire 60,000 people in the education sector as well as a so-called “generation contract” to encourage companies to hire young workers commences.

The new Socialist head of state has tried to break from his predecessor Nicholas Sarkozy’s pushy manner, promising to consult with social partners but gave unions until the end of the year to reach a “historic compromise” on labour reform or said the government would act unilaterally.

“He seemed to be a totally helpless president, expressing hopes for growth, some minor measures that practically came from the [President Francois] Mitterrand era,” Marine Le Pen, president of the far-right National Front, said. 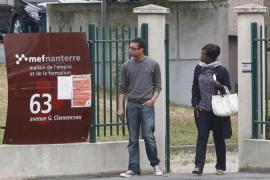 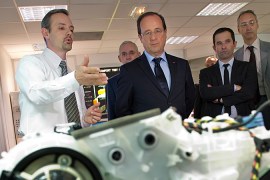 Socialists must implement dramatic reforms if France is to salvage economic and political influence, economists say. 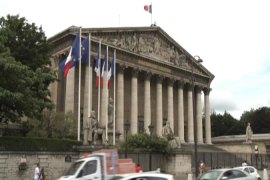 France votes to raise taxes on the rich

New measures, such as increases in wealth and inheritance taxes, have angered wealthy citizens.