A report by Human Rights Watch has raised concerns about the treatment of migrant construction workers in the Gulf state of Qatar.

The report, released on Tuesday, called on Qatar and world football governing body FIFA to commit to an overhaul of labour laws to ensure that stadiums and facilities for the 2022 World Cup “will not be built on the backs of abused and exploited workers”.

Qatar, one of the world’s richest nations – which in 2010 won the right to host the tournament – would be the first Middle Eastern country to stage the cup.

It has embarked on a huge building programme in the run-up to the tournament, including spending $11bn on a new international airport, $5.5bn on a deepwater seaport and $1bn for a transport corridor in the capital, Doha.

Most of migrant workers in the construction industry in Qatar come from South Asian countries, including India, Bangladesh and Nepal. According to the report, many are lured by irresponsible companies who make false promises of big salaries and good conditions before withholding wages and taking away passports once the workers arrive.

Qatari law requires that wages be paid on time and that housing meet minimum standards of comfort, but most companies are never forced to comply, according to the report. Qatar does not have a minimum wage, has not signed key international human rights agreements and prohibits unions, the report said.

“[FIFA] has a duty to its own teams and soccer players, its audience and most of all it has a duty to the working men here in Qatar to insist that the Qatari government and the private companies … abide by minimum labour commitments and labour standards,” Whitson said.

The report also said that Qatar should stringently enforce its ban on the confiscation of foreign workers’ passports. It also recommended improving the monitoring of company practices, and punishing those who break the law.

Additionally, it cited the importance of ending the compulsory sponsorship of foreign workers by Qatari nationals.

‘This has to end’

The group said Qatar had one of the most restrictive sponsorship laws in the Gulf region. Migrant workers are unable
to change jobs without their employer’s permission and their sponsoring employer must sign an exit permit before they can leave the country.

Al Jazeera asked the Qatari government to comment on the report several times, but they have declined the request.

However, Nasser bin Abdullah Hamidi, the Qatari labour minister, told The Associated Press news agency on Monday that the country’s cabinet had approved the creation of worker’s committees.

But Hamidi said the draft law had still to be approved by Qatar’s emir, Sheikh Hamad bin Khalifa Al Thani.

“We’ve spoken to workers in Qatar. There is fear. There is absolute denial of freedom of mobility,” Burrow said.

“People are not paid, and of couse they live in conditions that, as I said to the labour ministers yesterday, you would not have your son or daughter live in for love nor money. This has to end. We need to be able to organise unions.”

Poor working conditions are common across the region, where impoverished men and women from South Asia have come for decades to work on construction sites, oil projects or as domestic servants. 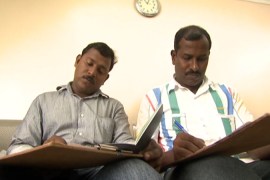 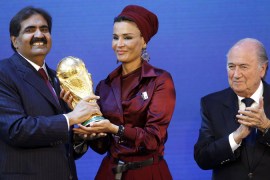 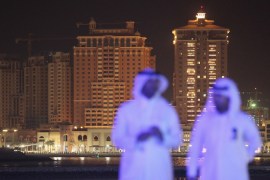 Qatar would host a winter World Cup in 2022

While they are planning a summer World Cup Qatar say they would shift tournament to the winter if ordered to by FIFA.