Four climbers – from Germany, South Korea, China and Canada – have died returning from the summit of Mount Everest, tour agents and officials say, with one other mountaineer also missing.

The 61-year-old German and the South Korean, aged 44, died on the south face of the world’s highest peak on Sunday, Ang Tshering Sherpa of the Kathmandu-based Asian Trekking adventure agency said.

“We are sad to announce the death of Eberhard Schaaf, of Germany, at the south side of the summit of Mount Everest,” Sherpa told AFP news agency on Monday.

“The medical staff at the Himalayan Rescue Association believe the cause of death to be altitude sickness.”

Schaaf was climbing with the Eco Everest Expedition to remove decades-old garbage from the mountain.

The South Korean, Song Won-Bin, who had been missing since Saturday, died at The Balcony, an area near the top of the 29,029ft peak.

The Seoul-based Yonhap news agency said Song had collapsed due to altitude sickness and fallen off a cliff, quoting a diplomat at the South Korean embassy in Kathmandu.

Yonhap said the climbers were part of a team of old classmates from the same high school in the central city of Daejeon.

Shriya Shah, a 32-year-old Nepal-born woman living in Canada, and Song also died while climbing down from the summit at the weekend, Gyanendra Shrestha, a Nepal tourism ministry official, told Reuters from the base camp without giving details.

“Two other climbers have gone missing on the mountain since Saturday.”

A few days ago, a 73-year-old Japanese woman improved her own record and climbed the peak for a second time becoming the world’s oldest woman to scale the giant peak.

Nearly 3,700 people have climbed Mount Everest since 1953 when Sir Edmund Hillary of New Zealand and Sherpa Tenzing Norgay scaled it.

At least 236 people have died on the slopes of the giant peak so far.

About 300 climbers are at different camps waiting for a window of good weather to climb the peak before the onset of annual monsoon rains next month prior to which all climbers evacuate from the Himalayas in Nepal. 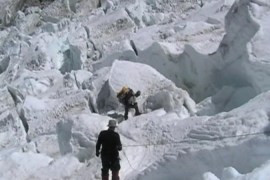 Local specialists court danger to make the expedition safe for the climbers.