The United States has eased financial sanctions against Myanmar to enable US-based non-government organisations to  to operate in the country in recognition of recent political reforms in the Southeast Asian nation.

The announcement by the treasury department on Tuesday allows transactions in support of aid groups and charities working in areas such as democracy-building, health and education, sports and religious activities.

It follows recent by-elections in which opposition leader Aung San Suu Kyi was elected to parliament, the release of hundreds of political prisoners, and a raft of reforms implemented by a military-backed civilian government since Myanmar’s generals ended decades of direct rule in 2010.

Myanmar has been isolated for decades by sanctions imposed over human rights concerns and the country is one of the poorest in Southeast Asia.

But the US government has said it will  “meet action with action,” gradually easing sanctions to reciprocate the government’s democratic changes. The European Union and Australia have also made moves towards easing sanctions.

In a statement on Tuesday to celebrate Myanmar’s Thingyan new year, Hillary Clinton, the US secretary of state said the country had “taken important steps on an historic new path toward democracy and economic development”.

“As you build a brighter future filled with new opportunities, the United States will continue to work with you to strengthen mutual understanding and trust between our two countries and peoples,” said Clinton, who paid a landmark visit to Myanmar in December.

Speaking to Al Jazeera, Soe Aung, a spokesman for the Forum for Democracy in Burma, which refers to Myanmar by its former name, expressed concern for premature lifting of sanctions.

“Many countries are thinking about giving rewards to the current administration – they haven’t thought about the remaining political prisoners and the ongoing attacks against the ethnic groups in many areas,” he said.

“This kind of action would send the wrong signal – that the current administration could do some small changes and could have more rewards.”

The US also plans to send a full ambassador for the first time in more than two decades, and to ease restrictions on American investment and the export of other financial services, although it has retained tough trade sanctions.

Australia said on Monday it would lift financial and travel restrictions covering more than 260 people in Myanmar, including President Thein Sein, but would keep its arms embargo and sanctions against around 130 other people, including military officials.

The European Union is expected to discuss suspending its economic sanctions next week. Such a step by the EU would put pressure on the US to do likewise, for competitive business reasons.

The Center for Strategic and International Studies, a Washington-based think tank, said the US would probably consider easing investment restrictions in sectors such as tourism, agriculture, telecommunications and banking.

It would retain bans on sectors such as natural resources and precious stones perceived to be closely linked to the military. Oil, natural gas and timber are major money earners for the country.

Lifting sanctions entirely would be contingent on government consolidation of the reforms. The military is still the dominant political force in Myanmar, and severe rights abuses are still reported in ethnic minority regions.

Despite the release of hundreds of political prisoners in recent months, others remain in detention. 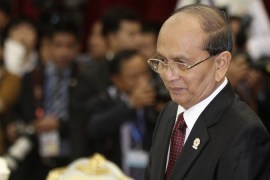 President among 260 civilian officials no longer subject to restrictions, but measures still in place against army. 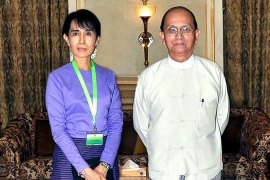 Opposition leader holds talks with President Sein as she prepares to take seat in parliament. 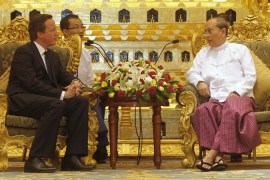 First Western leader to visit in decades “wants to see how things are going” before pushing for end to sanctions. 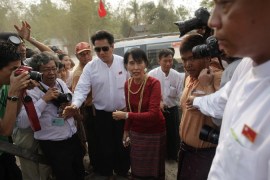 Democracy icon’s party says she has triumphed in by-election contest seen as test of government’s commitment to reform.