The announcement on Monday drew swift warnings from key trade partners, who said that relations with Buenos Aires would be damaged by the move.

YPF has been under intense pressure from Kirchner’s centre-left government to boost production, and its share price has plunged due to months of speculation about a state takeover.

Kirchner said the government would ask Argentina’s senate, where her party controls a majority, to approve a bill to expropriate a controlling 51 per cent stake in the company by seizing shares held exclusively by Repsol, saying energy was a “vital resource”.

“If this policy continues – draining fields dry, no exploration and practically no investment – the country will end up having no viable future, not because of a lack of resources but because of business policies,” she said.

Spain denounced the “hostile” move and warned that it would take “clear and forceful measures” in response.

“It’s a hostile decision against Repsol, thus against a Spanish business, and thus against Spain,” said Jose Manuel Soria, the Spanish industry minister, speaking at the same news conference.

“The government is announcing that it will take all the measures it considers appropriate to defend the legitimate interests of Repsol and of all Spanish businesses abroad,” he added.

Until recently, YPF had a relatively harmonious relationship with Kirchner, whose increasingly interventionist economic policies have infuriated critics.

The president praised YPF when it found massive resources of shale oil and natural gas in late 2010.

However, a surging fuel import bill has pushed a widening energy shortfall to the top of her agenda at a time of worsening
state finances in Latin America’s number three economy.

“This president is not going to answer any threat, is not going to respond to any sharp remark, is not going to echo the disrespectful or insolent things said,” Kirchner said earlier on Monday to applause from business, union and political leaders at an official event announcing the proposed law. “I am a head of state and not a hoodlum.”

Spain and the European Union last week warned that Argentina would damage relations with them if it went ahead and nationalised YPF.

She said the group would operate “as a corporation, with professional directors”.

YPF shares were suspended after plunging some 15 per cent on the news. In the last trades, shares were down 11 per cent at $19.50. Trading in YPF was also suspended in Buenos Aires.

Repsol bought Yacimientos Petroliferos Fiscales in 1999 for $15bn in what was the biggest operation of the privatisation programme of former Argentine President Carlos Menem.

The unit remains the largest oil firm in the South American nation, as the leader in fuel sales and 54 per cent of refining capacity. 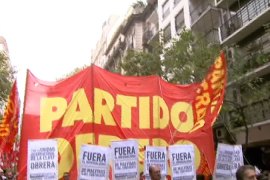 Argentina pushes its claim over Falklands

Buenos Aires continues its diplomatic offensive against UK and bid to isolate the islands. 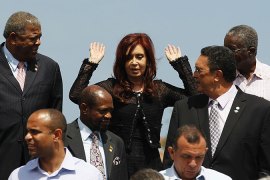 Argentina’s Kirchner walks out as summit unravels amid differences between US and Latin America over Cuba and Falklands. 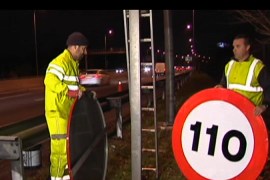 In a bid to decrease oil consumption, drivers in Spain are being encouraged to go slow.