Spain’s government has announced $36 billion in new budget cuts, as it attempts to reassure the European Union that it will not need a financial bailout.

“The ministries will see an average reduction of 16.9 per cent … there will be adjustments of over 27 billion euros [$36 billion] through revenues and through spending,” she said, after she and her cabinet colleagues passed the draft budget at a meeting in Madrid.

“This government will not raise value added tax but is calling for an extra effort within corporate taxes,” she said. Overall, government spending cuts will amount to $22.7 billion.

The government has also decided to freeze civil servants’ salaries, but to maintain unemployment benefits and planned pension increases.

Jose Manuel Soria, the country’s industry minister, further announced that electricity bills for small consumers would also rise by seven per cent during a quarterly review due in April.

De Santamaria termed the budget proposal severely austere, but essential. The measure is to go to parliament on Tuesday, and is expected to be formally passed in June.

“Spain is going to stop being a problem, especially for the Spanish people but also for the European Union,” Luis de Guindos, the economy minister, said as he entered an informal meeting of eurozone colleagues in Copenhagen earlier on Friday.

The passage of the new budget comes a day after a general strike against labour reforms that crippled public transport and industry and brought hundreds of thousands of people out in protest, but fell short of bringing the country to a standstill.

Spanish government estimates put the number of people attending rallies staged across the country at about 800,000.

If the costs are too high, Spain would find it increasingly difficult to finance itself at an affordable rate, and could eventually follow Greece, Ireland and Portugal in seeking a bailout.

The package will draw money out of the Spanish economy at a time when it is entering recession for the second time in three years.

Spain has committed to cut its budget deficit to 5.3 per cent of its Gross Domestic Product, from 8.5 per cent last year. The challenge for the country is to do so as the economy shrinks, and unemployment is at 23 per cent.

The new cuts come on top of $11.9 billion in spending cuts and $8.4 billion in tax increases already announced earlier this year.

De Guindos said he trusted his eurozone counterparts to “understand perfectly the effort that the Spanish government is making”.

At the meeting in Copenhagen, European finance ministers were discussing the size of a planned “financial firewall” for the EU, which would ensure that adequate funds would be available to weaker economies in the eurozone if they need to meet debt requirements.

They decided to increase the size of the European Stability Mechanism (ESM) and European Financial Stability Facility (EFSF) to 700 billion euros ($932 billion).

The possibility of using the eurozone’s financial firewall to help Spain, however, is “not an option on the table”, Italy’s deputy economy minister Vittorio Grilli said. 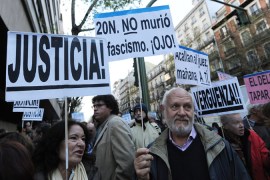 The justice of the judges wants to punish the only judge, who tried to listen to the voices of memory, in Spain. Jobless rate is twice the average for the rest of the EU, with young people particularly badly affected, new data show. 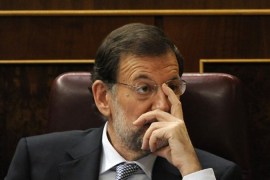 Austerity package set to save $11.5bn, with 2011 deficit estimated to equal eight per cent of GDP, well above target.