Leaders of the BRICS nations have met in India to discuss creating a new development bank, at a summit in which the bloc of emerging economies sought to convert its economic might into collective diplomatic influence.

The leaders of Brazil, Russia, India, China and South Africa attended the fourth meeting of the bloc, a key non-Western alliance, that is looking to extend its influence.

The five countries now account for nearly 28 per cent of the global economy, a share that is expected to continue to grow.

Top of the agenda was the creation of the grouping’s first institution, a so-called “BRICS Bank” that would fund development projects and infrastructure in developing nations.

The initiative would allow the countries to pool resources for infrastructure improvements, and could also be used in the longer term as a vehicle for lending during global financial crises such as the one in Europe, officials said.

Al Jazeera’s Sohail Rahman reporting from New Delhi said: “The opportunity is to build a commercial hub to help the bloc itself. They want to solidify economic growth between them.”

Though it remains in the planning stages, the leaders signalled their commitment to setting up the bank as a potential counterweight to other multilateral lenders such as the World Bank and the Asian Development Bank.

“It would be a very powerful financial tool to improve trade opportunities,” Fernando Pimentel, Brazil’s trade minister, told a session on Wednesday ahead of the summit.

BRICS finance ministers will examine the “feasibility and viability” of the proposal and report back before the grouping’s next summit, in South Africa in 2013.

The leaders also signed two other agreements aimed at simplifying credit facilities for exporters and increasing the use of each others’ currencies in trade deals.

They also pushed for a reform of international financial aid economic institutions, criticising the “slow pace” of reforms at the International Monetary Fund.

At their fourth summit together, leaders from the five members also issued a pre-emptive warning against any military action to end the unrest in Syria, or intervention in Iran.

“We agreed that a lasting solution in Syria and Iran can only be found through dialogue,” Indian PM Singh said in a closing statement at the one-day summit in New Delhi.

The BRICS leaders also voiced their support for a Syrian peace process as envisaged by Kofi Annan, the joint UN-Arab League envoy to the country.

The lead-up to the gathering saw demonstrations by hundreds of Tibetan exiles protesting against the presence of Chinese President Hu.

On Monday, a 27-year-old activist set himself alight during an anti-Beijing demonstration.

He died on Wednesday, becoming the first person outside China to self-immolate and adding his name to a list of 29 others who have killed themselves since March to protest against alleged repression by China in Tibet.

The presence of the 80,000-strong exiled Tibetan community in India, headed by the Dalai Lama, is a constant source of friction between India and China and their relations remain prickly despite growing trade.

The rivalry between the world’s two most populous nations is seen by critics as one of the main problems for the BRICS bloc, as well as the vast distances between members and their different political and economic systems.

While trade between them is booming, it still represents a small fraction of world commerce and they have struggled to come together on global economic issues, such as ongoing world trade talks or the leadership of the IMF and World Bank.

With members often holding divergent views on global political developments, the Delhi summit is expected to result in an increase in intra-BRICS trade, which expanded by 28 per cent last year to $230bn. 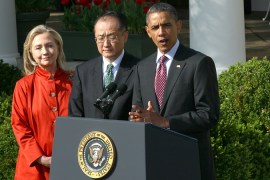 Breakthrough leadership for the World Bank

Obama’s nomination signals that it’s time for a development professional to lead the organisation. 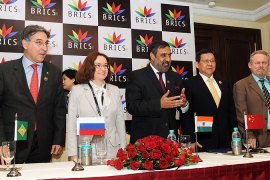 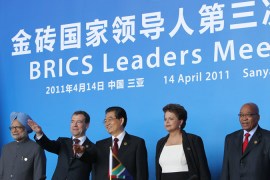 The cracks in the BRICS

Will the five-member group be able to find enough common ground to build institutions and make joint progress? 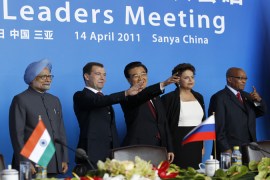 India recently suggested that it and four other growing economic powers start a jointly run bank.