Nigeria’s finance minister will run for the World Bank presidency, her South African counterpart has announced.

“We are proud to confirm that the Nigerian Finance Minister Ngozi Okonjo-Iweala will be a candidate,” Pravin Gordhan told reporters at a press conference in Pretoria on Friday, standing alongside her.

Angola, Nigeria and South Africa have all endorsed Okonjo-Iweala’s nomination to take over leadership of the global development lender when Robert Zoellick steps down at the end of his term in June.

The nomination marks a landmark push from emerging countries for high-profile roles in those international institutions which have remained the preserve of more developed nations.

“The endorsement is in line with the belief that the appointment of the leadership of the World Bank and its sister
institution, the International Monetary Fund [IMF], should be merit-based, open and transparent,” the three countries said in a statement.

Under a tacit agreement since the 187-member World Bank and its sister institution the IMF were founded nearly 70 years ago, Washington always selects a US citizen as World Bank president while European nations put a European at the IMF helm.

Okonjo-Iweala’s candidacy poses an unprecedented challenge to US dominance, while Jose Antonio Ocampo, the Colombian finance minister is also expected to run for the post.

Brazil said both Okonjo-Iweala and Ocampo would be “great” candidates to replace Zoellick as head of the institution, the latest sign of emerging nations wanting more say in how it is run.

Jeffrey Sachs, a professor of economics at Columbia University who has criticised the bank for neglecting African economic development, told Al Jazeera this month that he wanted to be considered for the post.

The US Treasury in February declared “the United States continues its leadership role in the World Bank,” as the largest shareholder, and would announce its candidate “in the coming weeks”.

Okonjo-Iweala’s joint endorsement is a rare display of unity among three countries often at loggerheads as they battle for dominance on the continent.

“She has eminent academic qualifications and would be, I think, a candidate of choice not only on the African continent but well beyond as well,” Gordhan said.

The three countries will lobby other African states to endorse her, Gordhan added.

Okonjo-Iweala said she was “absolutely” confident of her bid.

“I have long experience in the World Bank, in government and in diplomacy and I look forward to giving you my vision at the appropriate time,” she said.

“I share the World Bank vision of fighting poverty with passion. The issue is in what direction one must take this to make this the most beneficial,” she said. 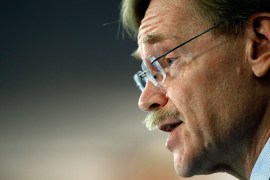 A World Bank for a new world

The World Bank requires a president that understands development and sustainability, not another Wall Street banker. 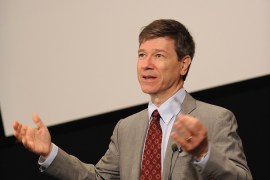 Jeffrey Sachs: ‘That’s not a free market, that’s a game’

The controversial economist talks about the collapse of the global financial system and how to end the crisis. 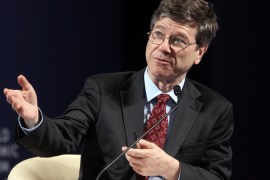 Jeffrey Sachs says global lender has made blunders of “huge proportions” as it is not led by development experts.