Barack Obama, the US president, has submitted a 2013 budget and said the new proposal, including tax hikes on the rich and jobs programmes, would expand economic growth in the country.

Obama said on Monday that his $3.8tn budget would create jobs, change an economic system tilted towards the wealthy and make long-term cuts to deficits now set to top $1tn four years in a row.

But the blueprint immediately sunk into the mire of Washington politics, with Republicans calling it an “insult” to taxpayers, a mere “campaign document” and an example of an America “drowning in debt”. 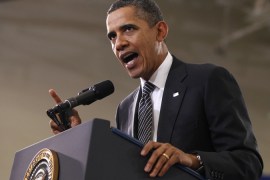 Annual US budget speech outlines plans for Middle East “incentive plan”, but proposal must be approved by Congress. 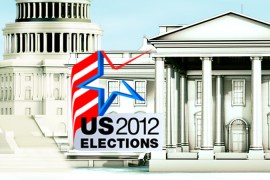 Comprehensive coverage of the presidential race and the challenges facing Obama in his second term.