Strikes and protests have hit volatile areas of Tunisia, including Sidi Bouzid where the Arab Spring started, as tensions rose between powerful unions and Ennahdha, the centre-right Islamist party that is the largest member of the ruling coalition.

The closure of the largest private and public employers in those areas was called by regional branches of the General Union of Tunisian Workers (UGTT), with only small shops and cafes open for business.

“We demand the resignation of the government,” “Ennahdha has sold Tunisia,” and “Long live the UGTT, the country’s biggest force,” the activists shouted.

The UGTT, Tunisia’s main labour union with a membership of 500,000, which was the only legal union under the previous regime, said the strike achieved a 95-per cent observance rate in Gafsa, a mining region prone to social unrest.

The action was seen as a prelude to a nationwide general strike called for December 13 by the UGTT to denounce an attack on its headquarters this week that it says was carried out by armed men close to Ennahdha.

The call for next Thursday’s national strike is only the third by the UGTT since its foundation in the 1940s.

Weeks of escalating tensions between the union and Ennahdha, culminated on Tuesday when UGTT members demonstrating at their head office were attacked by pro-government activists.

Ennahdha in turn accused the UGTT of orchestrating the confrontation.

The General Tunisian Confederation of Workers, a smaller trade union formed after the revolution and claiming some 50,000 members, said on Thursday it was in “full solidarity” with the UGTT.

The union denounced “all the hostile actions against the UGTT,” and condemned those behind them, urging Ennahdha to respect “trade union freedoms”.

Last week, intense clashes between police and disaffected youths in the town of Siliana, southwest of Tunis, left about 300 people wounded, after a strike and protests over poor living conditions degenerated into violence.

Ennahdha’s veteran leader Rachid Ghannouchi strongly criticised the UGTT, calling it a “radical opposition” group, and charging that its calls to strike had “political and not social motives”.

Clashes, strikes and attacks have multiplied across Tunisia in the run-up to the second anniversary of the revolution, plunging the country into a political impasse.

Many Tunisians feel bitterly disappointed by the failure of the revolution to improve their lives, especially in the country’s marginalised interior which suffers from a chronic lack of development and high unemployment.

During last week’s violence, President Moncef Marzouki said the coalition government was not meeting the expectations of its people and called for a cabinet reshuffle, but Jebali did not respond.

He warned that Tunisia was at a crossroads between “the road to ruin and the road to recovery”. 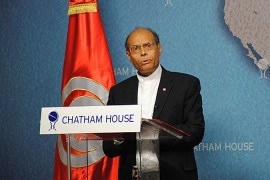 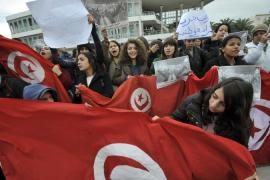 Siliana: A tale of deprivation and anger