Mexico says the leader of the feared Zetas drug cartel has been been killed in a firefight with soldiers in the northern Mexican border state of Coahuila.

But hours after the announcement on Tuesday, a group of armed men raided the funeral home where Heriberto Lazcano’s body was lying and snatched the corpse, officials said.

“A masked, armed group overpowered the personnel, took the bodies and forced the owner of the funeral home to drive the get-away vehicle,” Homero Ramos, Coahuila’s state prosecutor, told a news conference.

The navy said fingerprints taken from the body before the corpse was taken away have matched the records of Lazcano, known as El Lazca, confirming his death.

Al Jazeera’s Adam Raney, reporting from Mexico City, said it appeared the government may have been “embarrassed” by the loss of Lazcano’s body.

“This should be the moment of greatest victory or of greatest bragging rights for President Felipe Calderon. This is the biggest catch or kill on his watch and we have not heard anything from him, not even anything on his Twitter account,” he said.

“That could be perhaps because there is some embarrassment over the fact that the body was taken away by gunmen right after they did an analysis on him.

“What we have heard is mainly silence.”

In its statement, the Mexican navy said: “Information was obtained after the first forensics tests were carried out that yielded indications that suggest that one of the bodies is Heriberto Lazcano.”

It said the shootout took place after it received complaints about armed men in the area and sent out a patrol to check out the reports.

The men tossed grenades at the patrol from a moving vehicle, wounding one of the marines. His injuries were not life-threatening.

Two of the armed men were killed in the ensuing shootout, the navy said.

The Zetas cartel that Lazcano helped found with other deserters from an elite army unit went on to carry out some of Mexico’s bloodiest massacres, biggest jail-breaks and fiercest attacks on authorities.

Lazcano, who is also known as El Verdugo, or the Executioner, for his brutality, is suspected of involvement in hundreds of killings, including the June 2004 killing of Francisco Ortiz Franco, a top editor of a crusading weekly newspaper in Tijuana that often reported on drug trafficking.

Ortiz Franco was gunned down in front of his two young children as he left a clinic.

The US had offered a $5m reward and Mexico an additional $2.3m for information leading to Lazcano’s arrest.

Under Lazcano’s leadership, the Zetas recruited more hit men, many of them former Mexican soldiers, and hired “kaibiles” – Guatemalan soldiers trained in counterinsurgency – transforming what had been a small group of assassins into a ruthless gang of enforcers for the Gulf cartel.

The Zetas were also in charge of protecting the Gulf cartel’s drug shipments.

The Zetas finally split from their former bosses in 2010 and have since been fighting a vicious battle for control of the drug business in northeastern Mexico, the traditional home base of the Gulf cartel.

The result has been a surge in drug-related killings.

Lazcano “is credited with strengthening the organisation … he created a new structure of regional cells that specialise in specific crimes”, Mexican federal prosecutors say in their profile of Lazcano.

The Zetas earned their notoriety for brutality by becoming the first to publicly display their beheaded rivals, most infamously two police officers in April 2006 in the resort city of Acapulco.

The severed heads were found on spikes outside a government building with a message signed “Z” that said: “So that you learn to respect.”

Even with the death of Lazcano, the Zetas would still be run by a ruthless leader, Miguel Angel Trevino Morales, who has a reputation for being even more brutal than Lazcano.

Trevino Morales, also known as Z 40, has taken on a greater leadership role and has even been reported to have replaced Lazcano as operational chief.

The report of Lazcano’s death came just hours after the navy captured a suspected Zetas regional leader accused of involvement in some of the country’s most notorious crimes in recent years.

Jose Luis Vergara, Mexican navy spokesman, said Salvador Alfonso Martinez Escobedo was arrested on Saturday in Nuevo Laredo, across from Laredo in the US state of Texas.

The official said Martinez is believed to have masterminded the massacre of 72 migrants in the northern state of Tamaulipas in 2010.

The man, known as Squirrel, also has been linked to the escape of 151 prisoners in 2010 from a jail in the city of Nuevo Laredo, the recent flight of 131 prisoners in the city of Piedras Negras and the killing of US citizen David Hartley in 2010 on Falcon Lake, which straddles the US-Mexico border.

More than 60,000 people have died in drug-related violence in Mexico since December 2006, when Calderon put the military in charge of a campaign against organised crime.

Most of the deaths occurred in provinces alongside the Mexican border with the US. 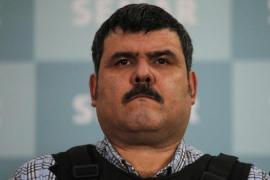 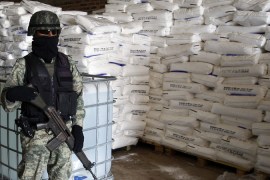 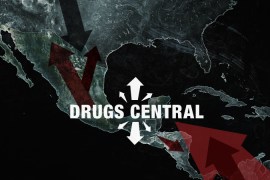 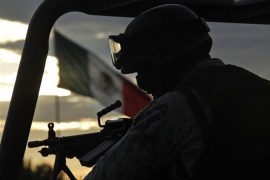 As Mexico’s drug war rages, we ask if the new government can end the violence and steer a democratic path to prosperity.