Thousands of demonstrators in Portugal and Spain have marched in fresh protests against austerity measures their
governments have imposed to tackle the countries’ debt crises.

Portuguese protesters staged marches in the capital Lisbon and a number of other cities on Saturday.

The government of Portuguese Prime Minister Pedro Passos Coelho, which is pushing through public spending cuts to meet the demands of the country’s international creditors, was the main target of the protests.

“The troika and the government out,” said one banner, a reference to the country’s international creditors: the European Union, the International Monetary Fund and the European Central Bank.

“Portugal has had enough of being robbed and humiliated,” one leaflet read.

In Lisbon, actors, singers and dancers took centre-stage on a special podium set in one of the city’s main squares.

“Culture is resistance, the artists are in the street,” was the slogan for what was billed as a day of cultural protests. Organisers said that several thousand people had turned out.

In a separate march, Portugal’s main trades union the CGTP led several thousand marchers to the front of parliament, where deputies are expected to vote through a harsh austerity budget on Monday.

Portugal received a $101bn bailout in May 2011 to help it battle its debt crisis. In recent weeks however, tens of thousands of Portuguese have marched in protest at the major spending cuts.

The unions have also called a new general strike on November 14.

In neighbouring Spain, about 2,000 people took part in a protest against austerity measures in the centre of the capital Madrid on Saturday.

The marchers, including many families, started their march from the local offices of the European Union.

Then they marched across to the city’s Puerta del Sol square, the symbolic home of the “indignants” movement that has sprung up in resistance to the government’s austerity measures.

“Don’t owe, won’t pay,” the marchers chanted. “The idea is to make some noise so they hear us,” said one protester, Marita. “But we already know that these leaders don’t have ears for us.”

An opinion poll earlier this week suggested that 70 per cent of Spaniards disapprove of conservative Prime Minister Mariano Rajoy’s rule as the nation veers towards a sovereign bailout.

When the poll asked if they believed the government knew how to confront the economic situation properly, 73 per cent of respondents said “no”.

Spain’s economy is in recession, with one in four workers unemployed. A heavy debt refinancing burden and high borrowing costs are pushing the country towards seeking a sovereign bailout.

The European Central Bank last month revealed a plan to drive down the borrowing costs of debt-wracked states by buying their sovereign bonds but only under strict conditions that Madrid hesitates to accept.

Earlier this month, Rajoy’s government unveiled an austerity budget for 2013 despite mass street protests, under pressure from European authorities to cut Spain’s deficit and restructure its economy.

Lisbon is also battling a deep economic recession and record unemployment. But it has convinced creditors to agree to easier public deficit targets of 5.0 per cent of output this year and 4.5 percent in 2013. Economic activity in Portugal is forecast to contract by 3.0 per cent this year. 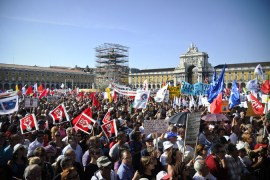 Protesters surround parliament in Madrid, while thousands take to the streets of Lisbon in new anti-austerity protests. 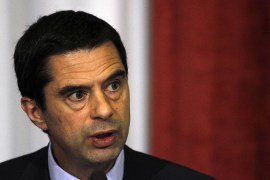 Move replaces previous plan that had to be abandoned in the face of widespread opposition and anti-austerity protests. 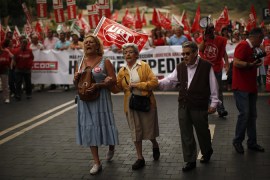