All European Union countries, except Britain and the Czech Republic, have agreed to sign up to a new treaty designed to stop overspending in the eurozone and put an end to the bloc’s crippling debt crisis, while also pledging to stimulate growth across the region.

The new treaty, agreed at a summit of European leaders in Brussels on Monday, is known as the fiscal compact and includes strict controls on debt levels intended to make it more difficult for countries which run up large deficits to escape sanctions.

The 17-country eurozone, backed by seven other nations within the wider European Union, hopes that the tighter rules will convince investors that all countries will get their debts under control and restore confidence in their single currency.

“It is the first step towards a fiscal union. It certainly will strengthen confidence in the euro area,” said Mario Draghi, the president of the European Central Bank.

While the new rules apply only to the eurozone states, the bloc was seeking broad support from other EU states, in the hope that the accord could eventually be integrated into the main EU treaty.

Britain had already said in December that it would not sign the new treaty, while the Czech Republic said it wanted more time to examine the budget pact before deciding whether or not to sign up.

“We do not want to hold up the eurozone doing what is necessary to solve the crisis as long as it doesn’t damage our national interest,” Cameron said.

Angela Merkel, the German chancellor, said the agreements on the fiscal pact and a permanent rescue fund for the eurozone were a “small but fine step on the path to restoring confidence”.

The members also agreed on the creation of a permanent bailout fund worth $650bn, known as the European Stability Mechanism, that will run alongside the existing $350bn that expires next year.

The summit also promised to stimulate growth and create jobs across the region, in a tacit acknowledgement that their exclusive focus on austerity had had painful side effects.

“The measures together are intended to restore confidence in the euro and boost its defences so that the sovereign debt crisis doesn’t happen again,” Al Jazeera’s Jonah Hull reported from Brussels.

Earlier on Monday, leaders pledged to offer more training for young people to ease their transition to the work force, deploy unused development funds to create jobs, reduce barriers to doing business across the EU’s 27 countries, and ensure that small businesses had access to credit. However there was no offer of any new financial stimulus.

“We must do more to get Europe out of the crisis,” they said in a statement.

Meanwhile, Greece, the eurozone country at the heart of the debt crisis, remained locked in talks with private creditors over a proposed debt swap that would write off about half of the Athens government’s debts.

Lucas Papademos, the Greek prime minister, said he hoped to reach a deal both with private creditors over restructuring its debt and with international lenders on conditions tied to a second bailout.

“Significant progress has been made in talks about private sector involvement … We are seeking to conclude negotiations with the troika by the end of the week,” Papademos said.

Greece has to strike a deal with the private investors to be able to get the next tranche of IMF-EU loan worth $172bn in order to avoid default on its loans, which analysts fear could threaten the global economy’s fragile recovery since the economic crisis of 2008.

“As long as the likes of Greece remain a problem, confidence in the markets will remain a long way off,” said Al Jazeera’s Hull.

French President Nicolas Sarkozy said on Monday he hoped a final agreement on Greece would be achieved “in the coming days” at a meeting of eurozone finance ministers or leaders. 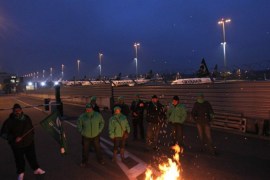 Strike brings Belgium to a halt 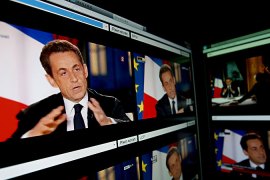 President, trailing in polls in run-up to April vote, pledges to use tax raise to tackle France’s chronic unemployment. 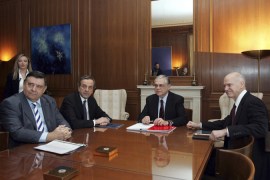 Lucas Papademos says there was “total convergence” among political allies on measures needed for a second bailout.