Nigerian regulators have announced the start of a deeply controversial measure to remove fuel subsidies, with labour unions warning of protests over a policy expected to lead to higher petrol prices.

A statement from the Petroleum Products Pricing Regulatory Agency (PPPRA) announced the “formal removal of the subsidy” in a statement on Sunday.

“By this announcement, the downstream sub-sector of the petroleum industry is hereby deregulated for (petrol),” a statement from the Petroleum Products said.

“Service providers in the sector are now to procure products and sell same in accordance with the indicative benchmark price to be published fortnightly and posted on the PPPRA website.”

The announcement in Africa’s largest oil producer and most populous nation comes at a difficult time, a day after President Goodluck Jonathan declared a state of emergency in areas of the country hard-hit by attacks from an armed Islamist group.

While the government has been discussing the subsidy removal for weeks, there was no prior warning to the public that it would occur on January 1.

The nation’s two key central labour unions – the NLC and the TUC – slammed the announced removal of fuel subsidies and called on their affiliates across the country to mobilise for a protest strike.

“In the next few days, the leadership of the NLC and TUC will jointly issue directives on the date organised national strikes, street demonstrations and mass protests will commence. We shall neither surrender nor retreat,” they said
in a joint statement.

“This New Year ‘gift’ by the presidency is callous, insensitive and is intended to cause anarchy in the country,” their statement said.

The Campaign for Democracy, a coalition of rights groups, and Conference of Nigerian Political Parties (CNPP), a grouping of opposition parties, have also joined the call for protests against the government move.

Economists and government officials view removing the subsidy as essential to allow for more spending on the country’s woefully inadequate infrastructure and to ease pressure on its foreign reserves.

Nigerians however view the subsidy, designed in part to hold petrol prices at 65 naira per litre ($0.40) as their only benefit from the nation’s oil wealth.

The government says more than $8bn was spent in 2011 on fuel subsidies.

Nigeria refines very little of its crude despite being a major oil producer, a situation blamed on corruption and mismanagement, forcing the country to import fuel even while it exports crude.

Subsidies are supposed to keep pump prices low even though fuel is being imported at market prices, but there have been serious questions over how the subsidy cash has been paid out.

There have been accusations that much of the money goes to a handful of corrupt elites. Fuel is also sold above the set price in many areas outside of major cities. 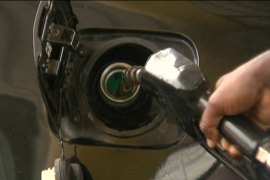 Some worry that the cost of living will skyrocket after the government stops subsidising fuel costs.