Greece has only one day left to clinch a eurozone bailout and a bond swap with creditors to manage its crushing debt repayments, its finance minister has said, warning that talks were “on a knife edge”.

“The moment is very critical,” Evangelos Venizelos told reporters on Saturday after a telephone conference with fellow eurozone finance ministers, which he described as “very difficult”.

“Everything must be concluded by tomorrow (Sunday) night… so that we can be within the timetable given the bond maturities in March,” the minister said.

Athens has been negotiating with the European Union, the International Monetary Fund and the European Central Bank on further action needed to unlock a new rescue deal worth 130bn euros ($171bn).

Pressure is also mounting for a deal with private lenders to wipe out part of the 350bn euro ($460bn) Greek debt, with Athens facing loan repayments of 14.4bn euros ($19bn) on March 20.

He said the time had come for the coalition of socialist, conservative and far-right parties backing the Greek interim government to make “a decision and a commitment” to pave the way for agreement.

Prime Minister Lucas Papademos is expected to summon the coalition party leaders to a meeting on Sunday.

But the outcome is unclear, as all three parties have expressed misgivings about the additional fiscal reforms demanded by Greece’s creditors.

Papademos has reportedly threatened to resign if his coalition backers reject the demanded austerity measures, though government spokesman Pantelis Kapsis refused to confirm this.

The coalition leaders are strongly opposed to demands for further civil service cuts, now reportedly affecting teachers and military staff, and for a reduction in the minimum monthly wage which now stands at 750 euros ($986).

Defence Minister Dimitris Avramopoulos warned on Saturday that “social tolerance has reached its limit” in Greece after two years of austerity.

“I fear society will not be able to respond to the asphyxiating terms being imposed,” Avramopoulos told financial daily Imerisia.

Around 30 youths on Saturday threw stones at the home of Greek President Carolos Papoulias in central Athens, causing minor damage to the building and cars parked nearby but no injuries, a police source said.

Verbal attacks and threats of violence against Greek politicians have escalated over the past year as the country has descended into a deep recession that has left nearly 900,000 jobless.

A report on Saturday said that agreement had been reached to trim Greece’s debt by 170bn euros ($223bn), compared to around 100bn euros ($131bn) previously, with the ECB and eurozone central banks now joining banks in the write-off initiative.

“The deal is expected to close on Tuesday,” a eurozone source told Ta Nea daily.

The newspaper added that the ECB would write down around 50bn euros ($65bn) worth of Greek bonds, with eurozone central banks adding another 10bn euros ($13bn).

Meanwhile, Venizelos said that a planned meeting by eurozone ministers on Greece originally scheduled for Monday would now be held on Wednesday.

Speaking to the German Spiegel magazine, Eurogroup chief and Luxembourg Prime Minister Jean-Claude Juncker raised the prospect of Greek insolvency should reforms not be pushed through.

“If we were to see that everything was failing in Greece then there wouldn’t be a new (refinance) programme” he said. “That would mean bankrupcy by March,” he added.

“Greece must know we will not go back on the issue of privatisations,” he said. He also decried what he termed “elements of corruption at all levels of the administration” in Greece. 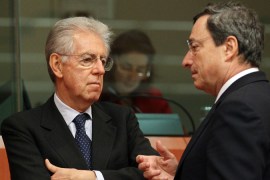 Germany and France reiterate their commitment to a new bailout to avert a disastrous debt default by the country. 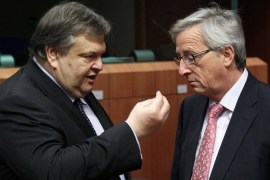 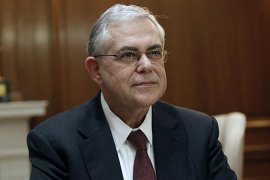 ‘Progress’ made in Greece debt talks

PM to resume talks with private creditors as the country awaits second tranche of IMF loan to avoid bankruptcy. 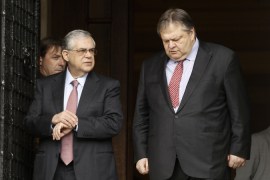 Debt-stricken Athens says German proposal to cede control of its fiscal policy to EU is “out of the question”.