The Zetas drug cartel gang has become the largest in Mexico after overtaking its rival Sinaloa, and now operates in more than half of country’s 32 states, a US security firm report says.

“By the end of 2011, Los Zetas eclipsed the Sinaloa Federation as the largest cartel operating in Mexico in terms of geographic presence,”  the Stratfor report published online on Tuesday said.

The Zetas operate in 17 states while the Sinaloa gang operates in 16 states, down from 23 in 2005, according to the US Assistant Attorney General’s Office of Special Investigations into Organized Crime, cited in the Stratfor report.

Both these cartels have subsumed smaller groups, with Sinaloa now controlling much of western Mexico, while Zetas has reinforced its control over much of the east, the report said.

Thousands of people have died in rising drug-related violence since the government of President Felipe Calderon launched crackdown against the drug cartels five years ago.

Last year, the Mexican police were able to capture some of the senior Zetas operatives, including its founding member Flavio Mendez Santiago.

Violence is likely to continue as the government pursues its strategy, Stratfor said, underlining geographical shifts in violent areas in recent months.

Although violent, the decades-old Sinaloa gang preferred “to buy off and corrupt to achieve its objectives,” while the Zetas, formed by ex-military personnel in the 1990s, “prefer brutality”, the report said.

The report’s authors anticipated a further spread of Mexican cartel activities in the Caribbean, Europe and Australia in 2012. 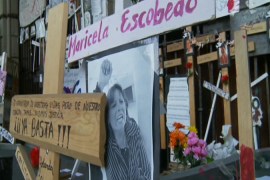 With a year left in his term, Mexicans unhappy with president’s record are taking to the streets in protest.