European shares jumped on Tuesday to make their largest percentage gain since May 2010 on hopes policymakers were putting together measures to help ease the region’s debt crisis.

The plan lacked any clear detail, however, and there were concerns over how policymakers would implement it. Some analysts put the gains down to a relief rally and the key FTSEurofirst 300 index remained in bear market territory.

Bank stocks featured among the best performers, with the STOXX Europe 600 banks index up 6.8 per cent, continuing their gains for the third consecutive session on the optimism of a coordinated action plan. They are still down 30.4 per cent so far this year.

French banks BNP Paribas and Societe Generale, which have heavy exposure to sovereign debt in Greece and Italy, were the stand out gainers and rose 16.8 per cent and 14.2 per cent respectively.

Helping boost market sentiment was talk that policymakers were preparing to leverage up the European Financial Stability Fund (EFSF), even though Jean-Claude Juncker, the chairman of eurozone finance ministers, said the volume of the rescue fund would not be increased.

Also helping to support confidence was talk that the European Central Bank was keeping its options open for a rate cut as well as increasing its liquidity provisions by offering banks struggling with fund raising one-year limit free loans.

Across the globe, Asian markets rebounded on Tuesday, with Hong Kong closing at more than four per cent, as a European deal to help the eurozone out of its crisis began to take shape.

The rally came as German Chancellor Angela Merkel met Greek Prime Minister George Papandreou for talks on Tuesday as part of European efforts to tackle the massive deficit in Greece.

Papandreou had earlier appealed to German business leaders at a conference to maintain their support for his country.

Merkel, at the same conference, said her country would “do everything we can” to aid the Greek recovery and restore market confidence by boosting demand.

Papandreou said Greece had made mistakes in the past but would repay all of its loans.

He assured investors that their money would be used to take the country forward, citing laws and reforms the country has made in a bid to explain why Greece deserved help.

He said Greek politicians and the people were making “superhuman” efforts to get on top of the crisis but warned that it would take time.

Analysts say a bailout fund of about $2.7tn would be needed if the crisis spreads to Italy and Spain, with some media outlets reporting that the eurozone was debating an increase in the fund to that amount.

But German officials have downplayed talk of any quick and dramatic change of course in tackling the debt crisis, such as further increasing the size of the $595bn rescue fund, the European Financial Stability Facility.

“We are giving it the tools so it can work if necessary,” he said, referring to the new powers allowing the fund to lend to countries such as Italy even before they hit cash flow crises.

Merkel has dismissed talk of allowing a controlled default of Greece, insisting instead on the step-by-step implementation of decisions already taken – a plan in which investors are losing faith.

Al Jazeera’s Tim Friend, reporting from Athens, Greece, said Merkel is the eurozone leader with the most clout, due to German’s financial might.

“Merkel has problems of her own with her domestic audience,” our correspondent said. “The Germans increasingly don’t like the thought that they are bailing out countries, particularly Greece, that they suspect haven’t looked after their own finances well enough in the past.

“There’s an element of public relations going on here – Papandreou being seen to make the effort and Angela Merkel being seen to be stern with him and keeping him on track with Greece’s austerity package.

“But the real issue is that Greek people are running out of hope. And they cant see any light at the end of the tunnel.”

In July, when it became clear that Athens needed more help, eurozone leaders agreed on a second bailout, although several aspects of that $11bn deal still need to be finalised.

The Greek government’s new measures to secure the release of vital aid include a new property tax to be paid through electricity bills to make it easier for the state to collect, as well as pension cuts and more tax hikes.

On Tuesday night, politicians approved the deeply unpopular property tax bill, which electricity company workers have threatened not to collect, as they say the power utility should not be used as a tax collection system.

Al Jazeera’s Nick Spicer, reporting from Berlin, said: “Greece is sticking to the plan and working with the IMF, EU and ECB and does not want to default.”

Debt inspectors from the IMF, European Commission and ECB, known collectively as the troika, are expected to return to Athens this week to resume a financial review suspended earlier this month amid talk of delayed implementation of reforms. 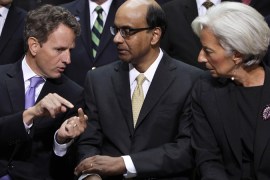 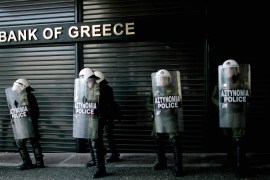 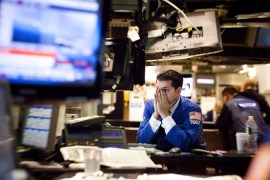 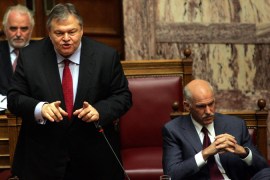