Global leaders and finance ministers have held a round of emergency calls to discuss the twin debt crises in Europe and the United States that are causing turmoil in financial markets.

The conference call between G7 finance ministers and European central bankers has concluded, and a statement will be issued in a while, Reuters reported late on Sunday.

After a week that saw $2.5 trillion wiped off global stock markets, they were under pressure to show political leadership and reassure markets that Western governments have both the will and ability to reduce their growing public debt loads.

French President Nicolas Sarkozy, who chairs the G7/G20 group of leading economies, conferred with Britain’s Prime Minister David Cameron ahead of the call.

The G7 is made up of the US, Japan, Germany, France, Italy, Canada and the UK.

“They discussed the euro area and the US debt downgrade. Both agreed the importance of working together, monitoring the situation closely and keeping in contact over the coming days,” a spokesman for Cameron said on Saturday.

Finance ministers and central bankers from the G7 were due to meet in early September in Marseille, but that meeting may now be brought forward.

Standard & Poor’s on Saturday defended its downgrade of the US long-term credit rating, and blamed the move on Washington’s political gridlock on fiscal policy.

The US Treasury had lashed out at the S&P’s decision on Friday to downgrade its AAA rating to AA+, with an official saying there was a “$2 trillion error” because the credit ratings agency used the wrong baseline.

S&P’s one-notch downgrade, while not totally unexpected, adds another level of uncertainty.

Loss of gold-plated status for the world’s benchmark interest rate risks pushing up borrowing costs on everything from car loans, mortgages and corporate debt to government bonds worldwide.

“However justified, S&P couldn’t have picked a worse time to downgrade the US,” said Rabobank in a note to clients.

A senior European diplomatic source said the US downgrade, coupled with Europe’s problems, raised the need for international policy co-ordination.

Barack Obama, the US president, called on legislators once again on Saturday to set aside partisan politics and work together to put the nation’s fiscal house in order and stimulate the stagnant economy.

But the most immediate concern for financial markets was the debt crisis in the euro zone, where yields on Italian and Spanish debt have soared to 14-year highs on political wrangling and doubts over the vigour of budget cuts.

Markets are anxiously looking for the European central bank [ECB] to start buying Italian and Spanish debt on Monday to stabilise prices, a move that has split the ECB governing council.

China, the largest foreign holder of US debt, criticised the world’s economic superpower for allowing its fiscal house to get into such disarray. It also revived its calls for a new stable global reserve currency to replace the US dollar.

“The US government has to come to terms with the painful fact that the good old days when it could just borrow its way out of messes of its own making are finally gone,” China’s official Xinhua news agency said.

China, it said, “has every right now to demand the United States address its structural debt problems and ensure the safety of China’s dollar assets.”

China and Japan have called for co-ordinated action to avert a new worldwide financial crisis. India’s Finance Minister Pranab Mukherjee told reporters: “There is no need to unnecessarily press the panic button.”

Dutch Finance Minister Jan Kees de Jager said: “I am in constant contact with colleagues in other countries and am following the development of the financial markets closely.”

Recrimination flew fast among US politicians over its debt downgrade, with each side seeking to blame the other for the impasse over how to solve the fiscal crisis.

In contrast, French Finance Minister Francois Baroin said France had faith in the United States to get out of this “difficult period”. Friday’s US unemployment numbers were better than expected and so things were heading in the right direction, he said.

“One should not dramatise, one needs to remain cool-headed, one should look at the fundamentals,” he told France’s iTele.

“There is no need for panic,” Polish Prime Minister Donald Tusk said. “We will see in August, and maybe more intensively in September what the effects for the world economy will be.” 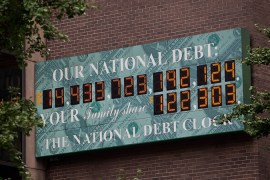 Standard and Poor’s downgrades rating to AA+ for the first time, as China says US must “cure its addiction to debts”. 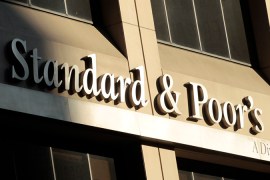 Q&A: What does US credit downgrade mean?

The drop from AAA to AA+ has left Americans, and the world, wondering why. 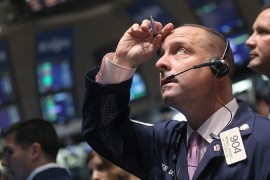 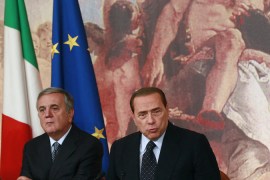 Who is to blame for Italy’s debt crisis – and how will it affect the global economy?