Global stock markets have rallied behind a comeback on Wall Street the US Federal Reserve’s unprecedented promise to keep interest rates near zero for two years to boost the US economy.

Oil prices rose $3 to almost $82 a barrel on Wednesday, and European shares opened slightly higher after a dramatic turnaround in Asian markets.

China’s yuan ended at a record high against the dollar on Wednesday as the People’s Bank of China
boosted the mid-point to its biggest one-day percentage rise since mid-November due to a weak dollar in the global market, the Reuters news agency reported.

“There is a lot of fear and uncertainty in the market, and negatives will add to that. So if we see an increase in unemployment from the US, that is going to cause an increase in volatility,” Samuel LeCornu, portfolio
manager at Macquarie Funds Group in Hong Kong, told the Associated Press.

South Korea’s Kospi, which at one point on Tuesday plummeted nearly 10 per cent, went up 0.3 per cent, the AP reported.

The US central bank’s indication that it expects the US economy to remain weak far longer than previously forecast supported earlier fears that pushed up demand commodities such as gold and oil.

“Volatility is calming down from an extreme level. Clearly there’s going to be considerable concerns still, but the market had gotten seriously carried away and gone to an extreme of fear,” Greg Gibbs, strategist at RBS in Sydney, told the Reuters news agency.

World stock markets had been tumbling since the start of August after a downgrade of the US credit rating on Friday, and the ever-expanding eurozone debt crisis.

“Immediately after the Fed statement, the market nosedived, perhaps expecting more, but in following hours it came back strongly, finishing four per cent up,” Turner said.

Wall Street shares posted their biggest one-day gain in more than two years on Tuesday, when the S&P 500 index leapt 4.7 per cent while the tech-heavy Nasdaq jumped 5.29 per cent.

“It’s possible the bottom has been met but it is too early to say so,” Albert Hung, chief investment officer at Sydney-based Alleron Investment Management, told Reuters.

“Normally when you see this sort of movement you need another two weeks to be sure the bottom has been found.”

“The Fed statement will give a boost to overall commodity markets as it is more like injecting confidence into the markets. But there are uncertainties over US economic growth and China,” the news agency quoted Ker Chung Yang, an analyst at Phillip Futures in Singapore, as saying.

Brent crude surged more than $3 to hit an intraday high of $105.67 a barrel, a day after settling at the lowest level since February.

“There are a lot of supply side issues to keep prices supported. The Libya crisis is going nowhere, and the key really is to see what is going to happen in China,” said Tony Nunan, a risk manager with Tokyo-based Mitsubishi Corp.

China’s implied oil demand in July rose 7.7 percent from a year earlier, picking up from June, which marked the slowest growth in more than two years, Reuters calculations show.

“Generally speaking, the panic is subsiding for the moment. I would expect that [gold] will consolidate at these levels for a while before we get any sort of clear idea of the sort of next major moves,” said Citigroup analyst David Thurtell. 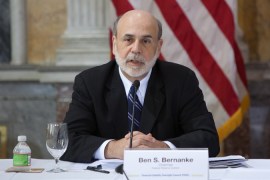 Central bank to sink $600bn into government bonds in a plan it hopes will push interest rates even lower than they are. 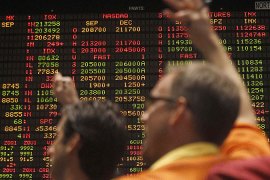 Benchmark interest rate to be kept near zero but no new monetary initiatives offered amid warning of sluggish economy. 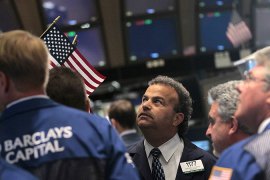