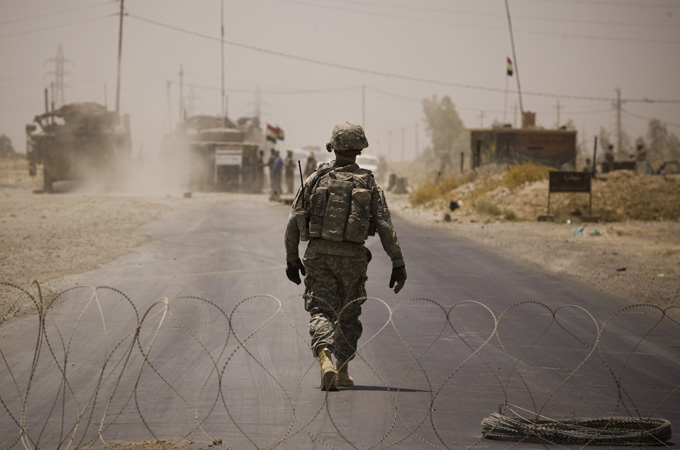 US spending on the wars in Iraq and Afghanistan has already cost at least $3.2 trillion, and could reach as high as $4.4 trillion, far higher than previous estimates, according to a new study released by Brown University.

The study tries to account not just for the direct costs of the war, but for indirect expenses such as ongoing medical care for wounded veterans. It was carried out by Brown’s Watson Institute for International Studies.

The findings contrast with the much lower estimate of war spending offered by US President Barack Obama during his address on Afghanistan last week.

“Over the last decade, we have spent a trillion dollars on war, at a time of rising debt and hard economic times,” Obama said.

That would be an almost-accurate assessment of direct war spending, with the US congress has appropriating about $1.31 trillion since 2001 for the wars in Iraq and Afghanistan.

The in-depth study by Brown includes several categories of spending, often not taken account of.

The heavily-indebted US has paid more than $185bn in interest on its war spending since 2001, while the Pentagon’s base budget has grown by $652b, the study estimates, compared to its pre-2001 trajectory.

“Any efforts to reduce the base budget, or even hold it steady, would predictably run into arguments … that it is unthinkable to refuse growth to the defence budget while we are ‘at war,'” the report’s authors noted.

The researchers found that medical treatment for veterans will eventually cost as much as the wars themselves.

The US has already appropriated $74bn to pay medical bills and disability insurance for soldiers.

Those are not one-time costs, though, because retired veterans continue to receive benefits from the military.

“[These] include factors such as family members who give up paid employment to become unpaid caregivers, loss of income for self-employed service members, and diminished quality of life,” the study states.

The Brown study builds on several past estimates.

The Congressional Research Service released a report earlier this year that estimated war spending at $1.4 trillion, roughly the figure cited by the Brown researchers.

In 2008, Linda Bilmes and Joseph Stiglitz published a book called The Three Trillion Dollar War which included deficit spending and medical care in the overall cost.

“We decided we needed to do this kind of rigorous assessment of what it cost to make those choices to go to war,” said Catherine Lutz, the head of anthropology at Brown and a co-director of the study.

“Politicians, we assumed, were not going to do that kind of assessment.”

The report also tries to estimate the human costs of both wars, though those figures are more difficult to pin down.

Casualty figures are well-documented: 6,051 US soldiers have been killed, along with roughly 2,300 contractors and 18,000 members of the Iraqi and Afghan security forces.

The report also includes the number of Pakistani soldiers killed – 3,520 – fighting the Taliban over the last decade.

Civilians have suffered far more, with at least 137,000 of them killed since 2001 – a figure the report says is almost certainly an underestimate.

“Nearly every factor that is associated with premature death – poverty, malnutrition, poor sanitation, lack of access to health care, environmental degradation – is exacerbated by the current war,” the report notes about Afghanistan.

It makes a similar statement about Iraq.

But the report does not try to calculate the number of these “excess deaths,” a measure which has proved controversial in the past.

A 2004 study by the British medical journal the Lancet, which estimated that 100,000 Iraqi civilians had died in roughly one year, was widely criticised for its lack of scientific rigour.