The Greek parliament has passed an austerity package to slash $40bn off the national debt.

The parliament passed the austerity package by a slim majority, with 155 members of parliament voting in favour, 138 against and 5 abstentions.

The package of taxes, spending cuts and privatisations has angered many Greeks, with thousands taking to the streets as part of a 48-hour national strike protesting against the bill.

George Papandreou, the Greek prime minister, has said the second bailout will be roughly equal to a previous package last year.

Papanderou expelled a Greek ruling party deputy who voted against the austerity packagae.

The five-year austerity package will allow Greece to secure a second bailout of $17bn of emergency loan funds on top of last year’s $157bn bailout from the European Union (EU) and the International Monetary Fund (IMF).

The vote took place as clashes between police and protesters broke out outside parliament, with the booms of stun grenades and tear gas resonating across the square outside the building.

Riot police fired volleys of tear gas at swarms of young men who were hurling rocks and other debris as well as setting fire to rubbish containers.

Police with truncheons occasionally charged the demonstrators, but pulled back just as quickly.

As stun grenades boomed and flashed, many members of the crowds jeered and booed.

Most of the anti-government protesters who marched to the square stayed clear of the fighting, but they vented their anger at the political establishment with chants and insults.

Al Jazeera’s Barnaby Phillips, reporting from Athens, said: “Right around the centre of the city of Athens not just in Sytagma square the atmosphere is extremely volatile.

“I think the majority of people who came here were always very peaceful in terms of their intentions and they have tried to spend the day, inspite of the swelling tear gas in front of the parliament building expressing their concern.”

Speaking to Al Jazeera, Matina Stevis, a Greek journalist, said: “I can almost hear the sighs of relief from the rest of Europe, but this is not good news, it has been an incredibly dramatic day in Athens.”

Stevis said that she was worried that the austerity package is too harsh and unimplementable.

EU officials have called on Papanderou to draw the widest possible support.

Christine Lagarde, named as the next head of the IMF, called on Greece’s opposition parties to offer support.

The IMF provides about 30 per cent of Greece’s bailout fund.

European Commission President, Jose Manuel Barroso and European Council President, Herman Van Rompoy, said in a statement that the Greek parliament’s approval of the bill is a “vital step back” from a debt default.

The euro rose against the dollar after the parliament approved the austerity measures needed to avoid a default, though concern over whether the government can implement them could limit gains. 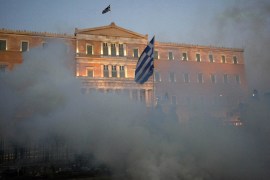 Government says package of cuts necessary to stave off threat of bankruptcy as protests and national strike continue. 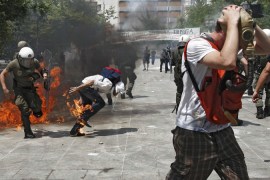 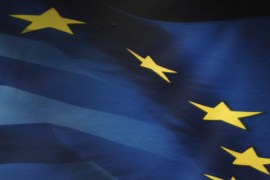 Despite the announced rescue package, Greece looks more and more like it will default on its debt. 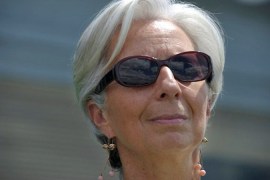