US legislators are scrambling to break an impasse on the national budget which threatens to shut down the federal government.

Democratic and Republican congressional leaders blamed each other for the stalemate over federal funding for the rest of the fiscal year ending September 30.

Both sides could not agree on the sticking points that are blocking the deal, which has to be sealed by midnight on Friday.

Democrats are saying that the two sides were at odds over federal funding for birth control but the Republicans say spending cuts were the issue.

Without an agreement on spending for the next six months, money to operate the federal government runs out at 04:00 GMT on Saturday, and agencies such as the Internal Revenue Service will begin a partial shutdown.

Negotiators from both sides have agreed to $38bn in cuts for the current fiscal year but remain at odds over where they would fall. Republicans are resisting a Democratic proposal to cut $1.7bn from defence.

Barack Obama, the US president, called John Boehner, the House of Representatives’ Republican speaker, and Harry Reid, the senate’s Democratic majority leader, about the continuing talks.

Reid said the last issue was a Republican push to give states greater discretion over federal funds earmarked for birth control and women’s health clinics. Democrats say that would give Republican governors licence to choke off those funds.

“Republicans want to shut down the government because they think there’s nothing more important than keeping women from getting cancer screenings,” Reid said on the senate floor. “This is indefensible and everyone should be outraged.”

Boehner said the final stumbling block was spending cuts that Republicans say are needed to rein in budget deficits hitting $1.4tn a year.

“Almost all of the policy issues have been dealt with and there is no agreement on the spending limit, and we’re working to try to get there,” Boehner said.

“We’re not going to roll over and sell out the American people like has been done time and time again in Washington. When we say we’re serious about cutting spending, we’re damn serious about it.”

The White House said a shutdown would idle about 800,000 federal government workers and put a crimp in the nation’s economic recovery.

Investment firm Goldman Sachs estimated a government shutdown lasting more than a week could cost the US economy $8bn in missed federal spending, dragging down growth.

Fear that a government shutdown could hurt economic growth on the margins pressured the dollar and US Treasury prices on Friday.

Longer-term, investors are looking at the last shutdown, in 1995, when predictions of spending cuts made both government debt and the dollar more appealing and both rose.

The showdown is the biggest test of leadership for Obama, a Democrat, and congressional leaders since Republicans made big gains and took control of the House of Representatives in elections last November. 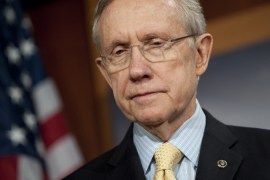 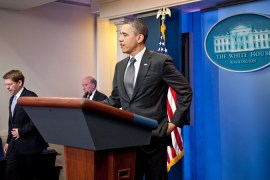 Progress claimed in US budget talks

Obama and legislators say they are trying to avert shutdown that would hit economy when government funding bill expires. 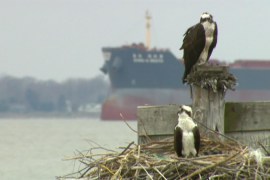 A Republican proposed bill could impact the clean-up of America’s largest bay. 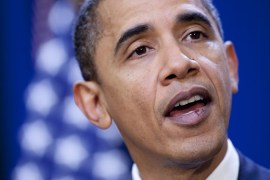 Obama vows to tackle US deficit

US president says steps he is taking are going to be “difficult” and require Democrats and Republicans to work together.