Hundreds of angry investors in Bangladesh have marched in Dhaka, the Bangladeshi capital, following the latest in a series of stock-market collapses

The protesters gathered outside the Dhaka Stock Exchange building on Sunday, chanting slogans and bringing traffic to a halt.

Substantial share price gains last year encouraged a flood of new investors to enter the market, but falling prices following attempts by the market regulator and the central bank took to calm trading, have prompted an angry response from investors.

“I invested all my savings in the share markets, but have lost everything. Now I am a pauper,” one sobbing investor said.

The benchmark Dhaka index shed 5.7 per cent on Sunday, the first working day of the week Bangladesh, following a slump of 2.5 per cent on Thursday, the last day of trading before the weekend.

Many small investors took out large loans to invest in shares at a time when the weakness of the economy made shares look an attractive investment.

“We are trying our best to bring back stability to the stock markets,” Abul Maal Abdul Muhith, Bangladesh’s finance minister, said.

The government has ordered the listing of 26 state-owned companies in an effort to increase the supply of shares.

Mugith asked the heads of these companies on Sunday to list their shares within a short time or quit, but he did not specify a timeframe for the listing.

One stock broker said a slide in confidence had led to panic selling by retail investors, while banks and other institutions had remained inactive.

Banks, some of which had invested 75 per cent of their deposits in the stock market against a cap of 10 per cent in the past, recently held back on further investments. 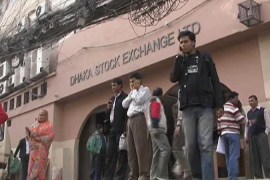 Monday’s crash at the Dhaka Stock Exchange wiped out $9bn off the markets. 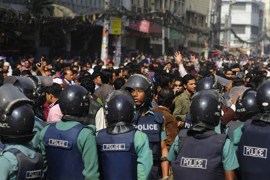 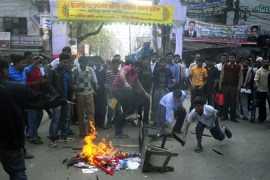 Clash in Bangladesh as stocks dive

Police fire tear gas as thousands rally in capital, Dhaka, to vent their anger at record 9.25 per cent plunge in stocks.