Herman Cain, the US presidential contender, says he is suspending his Republican nomination campaign after  allegations of adultery and sexual harassment.

The Georgia businessman has been under mounting pressure to quit following the claims, which he denies.

“I am suspending my presidential campaign because of the continued distraction, the continued hurt caused on me and my family,” he told supporters in Atlanta, Georgia.

“These false and unproved allegations continue to be spinned in the media and in the court of public opinion so as to create a cloud of doubt over me and this campaign and my family,” said Cain.

Cain said distractions of hurt caused by  “false and unproved allegations of harassment and infidelity have taken toll on my family, but I am at peace with my God.”

Before he made his speech, Cain discussed with his wife, Gloria, on Friday whether to press on with his campaign.

The dramatic announcement effectively ends a campaign that took Cain, a former pizza executive who rose from humble origins, to the front ranks of a Republican field despite his lack of political experience.

Cain’s decision followed a drumbeat of accusations that erupted early last month when two women came forth to charge that he sexually harassed them while  he was president of a trade lobbying group in the 1990s.

The final blow came this week, when Atlanta businesswoman Ginger White disclosed she had had a 13-year extramarital affair with Cain that ended only eight months ago.

Cain’s support has been dropping as he has attempted to outlast the allegations and other campaign mishaps, but the bad news is taking its toll.

He said he would endorse another candidate at a later date but gave no hint of where he would direct his supporters to go.

Al Jazeera’s Tom Ackerman, reporting from Washington, said: “It was clear Cain was falling in the polls when the allegations was made.”

Gingrich has now overtaken frontrunner Mitt Romney in some opinion polls on who should be the Republican candidate to challenge Barack Obama for the White House in November 2012.

“The bulk of Cain’s supporters will go to Gingrich,” rather than Romney, said our reporter.

Next month, voters in Iowa will begin the process of choosing a Republican presidential candidate for 2012.

The phrase “suspending a campaign” has no formal meaning under US election law.

Candidates use it most frequently when they drop out of their primary race. The reason is that if a candidate “ended” the campaign instead of merely “suspending” it, then they  might lose eligibility for federal matching funds that would help pay off their debts.

Used at least as far back as the 1970s, “suspending a campaign” remains the most popular way for candidates to end their bids without closing down their campaign panels. 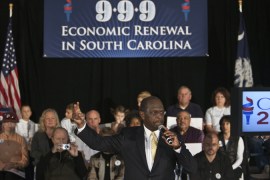 Presidential contender expected to declare in Atlanta whether or not he will remain in race for Republican nomination. 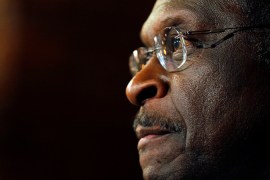 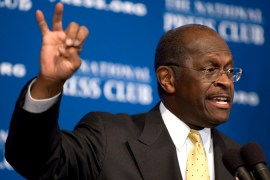 Herman Cain and the conservative victimology 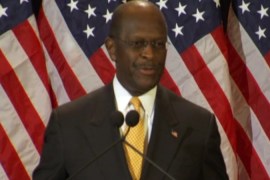 Cain vows not to withdraw from US race