The top military commander in the US has said that he believes the eurozone is at great risk and warned that any breakup of the bloc could have consequences for the Pentagon, even threatening its top weapons programme.

“The eurozone is at great risk,” General Martin Dempsey, chairman of the Joint Chiefs of Staff, told an event hosted by the Atlantic Council, a Washington-based think tank.

Dempsey suggested part of his concern was that the US military could be exposed to any unravelling of the eurozone.

“I mean [exposed] literally, through contracts and programmatics, but also because of the potential for civil unrest and the breakup of the union that has been forged over there,” said the general.

The US military has more than 80,000 troops and 20,000 civilian workers in Europe, many based in Germany.

Dempsey pointed to the F-35 Joint Strike Fighter, the Pentagon’s costliest weapons programme, which the US is developing together with partners including Britain and Italy, which could also be at risk .

A crisis in Europe, if it were serious enough, could force allies to re-allocate spending which had been earmarked
for the F-35, he said.

That, in turn, could drive up the cost of individual US aircraft at a time when US defence budgets are squeezed.

“It will clearly put them at risk if all the economic predictions about a potential collapse were to occur – inflation, devaluation,” said Dempsey.

A four-star general with a master’s degree in English, and previously serving as the chief of staff and as a general in Iraq, Dempsey acknowledged he was no expert on economics and it is rare for a chairman of the joint chiefs of staff to comment so extensively on economic issues.

“I know that they’ve taken some measures here with the 17 members of the eurozone to try to better align – and I guess that’s the right phrase – monetary and fiscal policy.

“But it’s unclear, to me at least, that that will be the glue that actually holds it together.”

Global stocks rebounded and the euro rose on Friday after 26 of the 27 EU countries agreed to forge a tighter fiscal union.

Only the UK refused to sign up to a new treaty, citing national interests.

It was unclear if Dempsey was aware of the accord when he made his remarks. 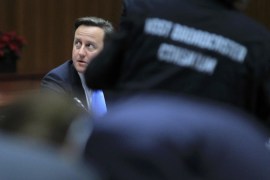 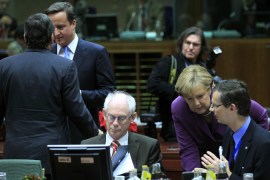