The former chief executive of Olympus has told fellow board members to step down because of a huge accounting cover-up but said the Japanese firm “could survive” the scandal.

Michael Woodford made the comments on Friday following a board meeting at the company’s Tokyo headquarters, six weeks after being dumped as the first ever non-Japanese president and chief executive in the camera-maker’s 90-year  history.

Woodford, who remains a director despite his ousting, called for the board to be axed over the cover-up, which local media said could reach more than $3bn in losses dating back to the 1990s. Other reports have pegged the loss figure at around $5bn.

The Briton described a special board meeting held on Friday as “tense” but added there was a general agreement that the current slate of directors would have to be replaced.

“They’ve taken the company to its knees, not me,” he said.

Olympus shares rose 8.63 per cent on Friday to close at 1,107 yen, less than half their value the day before Woodford’s sacking.

Despite the unfolding scandal, Woodford said Olympus was a “fantastic business” with its core camera and medical equipment operations still strong.

“If the banks are supportive, which I believe, Olympus could survive as an independent entity, very much so,” he said. “Our factories will continue to produce [quality] products because people want to buy them.”

Woodford said he was open to returning as the firm’s chief but was “not begging to come back”, and stressed it was crucial for Olympus to meet a December 14 deadline to release its earnings, and avoid a delisting from the Tokyo stock exchange.

The only reason to delist the firm was if speculation about the cover-up’s ties to organised crime could be proven, Woodford said, adding there was “no evidence” to support the claims.

“I made clear [at the board meeting] it would be wrong to delist the company,” he said. “The priority is to get the accounts out by December 14.”

The board meeting had been set for a showdown between Woodford and the three main figures implicated in the cover-up, but on Thursday the company announced that Tsuyoshi Kikukawa, a former chairman, and two other directors had
quit the board.

Kikukawa resigned in October as president, not long after replacing the ousted Woodford, and chairman, while Hisashi Mori was sacked as executive vice-president earlier this month and auditor Hideo Yamada “showed his intention to resign”, the company said.

The trio had remained as board members but have now left, the company said.

Mori and Yamada allegedly manipulated books by employing a scheme called “tobashi”, which translates literally as “blow away”, moving investment losses off their accounts into areas where investors would not see them.

Mori reportedly led four deals including the $2bn purchase of British medical-instruments company Gyrus in 2008, in which Olympus has admitted paying $687m to a little-known financial adviser based in the Cayman Islands.

Earlier, Woodford said the board “is all contaminated. Absolutely. They made all these decisions. All of them have to go”.

Amid media speculation that Yakuza organised crime syndicates could have had a hand in the financial shenanigans, Woodford said he was pleased with the attitude of the Japanese authorities, who assured him the case would be
investigated thoroughly.

“I think justice will be done,” he said in a speech at a media event on Thursday. 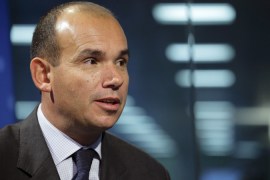 Ousted Olympus CEO to meet board in Tokyo

Michael Woodford, who blew lid on irregular financial practices of $1.4bn, flies to Japan in bid to win role back. 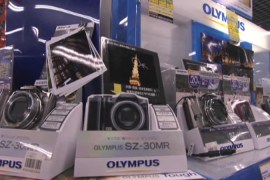 Camera and medical giant embroiled in three-way investigation for under-reporting decades of losses. 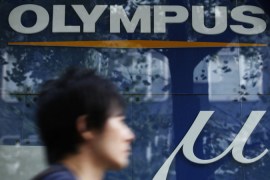 Executives at the camera-manufacturing giant are accused of hiding decades worth of financial losses from stakeholders.

In a reversal, Tokyo-based company admits a series of corporate acquisitions was used to mask massive losses.