Barack Obama’s push for consensus over renewed concerns about Iran’s nuclear programme have had a lukewarm response from the Russian and Chinese leaders attending the APEC summit in Hawaii.

The US president had sought support from Dmitry Medvedev and Hu Jintao as he seeks to rein back Iran’s nuclear ambitions, but he got no public endorsement from either of them.

Obama met his counterparts on Sunday on the sidelines of the summit in Honolulu, the capital of his home state, where he discussed a UN nuclear watchdog report that said there was “credible” information that Tehran may have worked on developing nuclear weapons.

Al Jazeera’s Patty Culhane, reporting from Honolulu, said there was “absolutely no consensus” between the leaders on how to deal with Iran following the International Atomic Energy Agency’s report.

“This was President Obama’s first face-to-face meeting with Hu and Medvedev since the IAEA report came out. The US believes that it needs China and Russia to get on board with sanctions and it was fairly clear … that he did not get any reassurances,” she said.

“You’ve heard him say that they agreed to find a common strategy. That’s far from agreeing to more sanctions. What they say they’re going to do now, is to wait for the board of governors’ meeting at the IAEA.”

Russia and China are reluctant to back the US in its push to tighten international sanctions on Iran. Both are veto-wielding members of the UN Security Council and have shown no sign that the new report will change their stand.

Alongside Medvedev, Obama said the two “reaffirmed our intention to work to shape a common response” on Iran.

Shortly after, Obama joined Hu, in a run of back-to-back diplomacy with the heads of two powers that hold complicated and at times divisive relations with the US.

Obama said that he and the Chinese leader want to ensure that Iran abides by “international rules and norms”.

The US president’s comments were broad enough to portray a united front without yielding any clear indication of progress.

Medvedev, for his part, was largely silent on Iran during his remarks, merely acknowledging that the subject was discussed. Hu did not mention Iran at all.

White House aides insisted later that Russia and China remain unified with the US and other allies in preventing Iran from developing nuclear weapons, and that Obama, Hu and Medvedev had agreed to work on the next steps.

“I think the Russians and the Chinese understand that,” he said. “We’re going to be working with them to formulate that response.”

Iran, which said it would review its co-operation with the UN nuclear watchdog after the report, has insisted its nuclear work is in peaceful pursuit of energy and research, not weaponry.

This year’s summit was dominated by fears over the eurozone crisis and talks on the Trans-Pacific Partnership, a US-led free trade deal that knock down trade barriers across the Pacific Ocean.

After leaving Hawaii on Monday, Obama will celebrate 60 years of security ties with Australia and make the first visit by a US president to the East Asia summit, set for Bali next week. 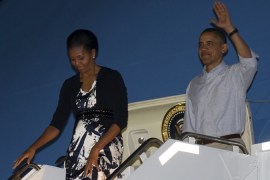 US president on nine-day tour of Pacific Rim for talks with some of Washington’s most important and complicated allies. 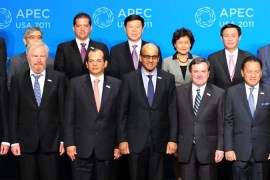