Finance ministers from eurozone are meeting in Luxembourg to discuss the Greek debt crisis after international auditors spent the weekend investigating Greece’s finances.

Al Jazeera’s Jacky Rowland, reporting from Luxembourg, said Greece would have a difficult time convincing finance ministers to continue with the bailout.

“The question that the European finance ministers are asking themselves is whether Greece is a basket case,” she said.

“The Greece themselves would say no. Their finance minister, who is in Luxembourg, said ‘yes, Greece has structural problems, but Greece is not the scapegoat of the Eurozone.

“The problem is it is difficult to convince other minsiters of that when just 24 hours earleir you have admitted that you have missed your defeciet target for 2011, and that 2012 is not looking good either.”

The summit came as Greece’s government moved to present a fresh package of budget cuts to parliament amid growing concern that the country stands on the brink of a financial collapse which could endanger the entire global economy.

The government has already said that it will miss deficit-reduction targets set by the European Union and the International Monetary Fund as a condition of bailout payments necessary to keep the Greek economy afloat, prompting stock market alarm.

Without access to the $150bn bailout fund, paid for by other eurozone countries and the IMF, analysts say Greece could run out of funds by mid-October.

Manoj Ladwa, a senior economical analyst told Al Jazeera, there was a strong possibility Greece could slide into bankruptcy at some point. That would prompt an assessment of the future of the eurozone, he said.

Athens is labouring under 350 billion euros or more of debt, with its stripped-bare economy already on its knees.

The revelation that Greece is finding it increasingly difficult to reduce its borrowings in spite of all its austerity measures has raised concerns that its international creditors could effectively pull the plug.

On Sunday, Greece’s finance ministry said the deficit this year would probably be 8.5 percent of gross domestic product, higher than the 7.8 percent previously anticipated.

The ministry blamed a deeper-than-expected recession for the failure to meet the target, with the economy contracting by 5.5 percent instead of the 3.8 percent estimate made in May.

The announcement prompted widespread selling in stock markets on Monday, as benchmark indexes in London, Paris and Frankfurt were down by about two per cent in morning trading, raising further concerns over the stability of the eurozone.

But international pressure on Greece to impose the austerity measures demanded by its creditors has provoked many in the country to protest.

“There is a programme of social destruction in Greece,” he told Al Jazeera. “One out of four Greeks will be out of a job pretty soon.

“The entire social structure of Greece has been destroyed… the people can’t afford to pay these different taxes, families are facing huge problems.”

The Greek government’s latest measures to cut costs include plans to suspend 28,000 public sector employees on reduced pay by the end of 2011.

The programme falls short of the 30,000 reduction demanded by Greece’s creditors and offers many the prospect of early retirement on a full pension.

Those affected would be paid a fraction of their actual salary for a period of one to two years, but would be able, at the same time, to hold jobs in the private sector, if they can find them.

The cabinet has also committed itself to reducing civil service jobs by 150,000 within four years. 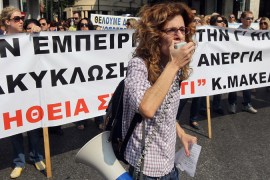 Deficit this year to reach 8.5 per cent of GDP, exceeding target imposed by lenders, despite plans to slash public jobs. 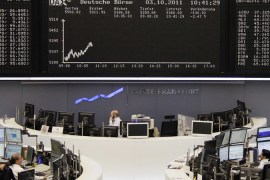 Stocks fall in Europe and Asia with French banks under pressure amid fears over Greek debt crisis and recession danger. 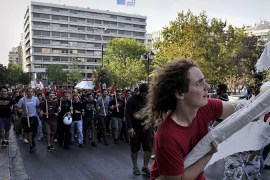 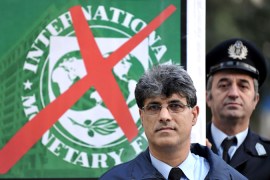