The US economy created 103,000 jobs in September, the labour department has reported, a much stronger figure than expected but not enough to lower the unemployment rate.

Economists had expected Friday’s report to say that the economy only replaced 60,000 jobs in September.

The private sector accounted for all of the the gains, which were boosted in part by the return of 45,000 telecommunications workers who had been on strike in August.

Meanwhile, the unemployment rate was still stagnant at 9.1 per cent for the third straight month in September.

For African-Americans, the unemployment rate is 16.7 per cent – the highest it has been in 27 years and double the rate of unemployed whites.

Al Jazeera’s Patty Culhane, reporting from Washington, explained that the number of unemployed and under-employed Americans is in the millions.

“There are still 14 million Americans who aren’t working today, even though they’d love to have a job,” she said.

“Beyond that, there are something like six million that have been unemployed for more than six months. That is a unique feature of this recession – how long people are staying out of work.”

She said there are another nine million Americans “who are working part-time jobs because, quite frankly, that’s the only job they can find”.

With the underlying data still dire, Friday’s news is unlikely to dampen President Barack Obama’s calls for congress to pass a $447bn jobs bill- which he says could create 1.9mn new jobs.

“I think people are frustrated, and the protesters are giving voice to a more broad-based frustration about how our financial system works,” he said at the White House.

Republicans, who oppose Obama’s jobs bill, said the latest jobs figures were another indication of Obama’s mismanagement of the economy.

“There were far too few jobs created this month, which shows the need to spend less time making campaign style speeches and more time trying to work together to identify policies that we both can agree will create an environment for job creation,” Eric Cantor, the House of Representatives majority, leader said.

Al Jazeera’s Culhane said that Obama is playing “campaign politics” by “going all around the country saying blame the republicans”.

But, she points out, “no US president in recent history has ever won a second term with unemployment anything close to this high”. 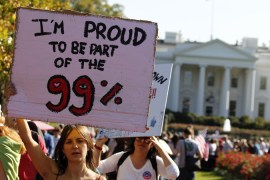 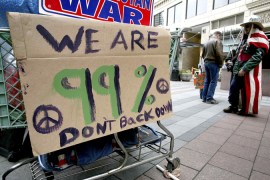 Activist and author Kalle Lasn shares the revolutionary fervour behind a growing US anti-corporate protest movement.