The new budget is 40 per cent bigger than the previous year’s because of cuts in subsidies on energy and food items as well as a sharp spike in the global price of oil.

The official IRNA news agency said on Monday that the budget was based on oil at $81.5 per barrel although oil prices have hit levels well above $100 in recent months.

Mahmoud Ahmadinejad, the Iranian president, submitted a $540 billion budget to the parliament on February 20, hoping that the subsidy cuts would bring in an additional $62 billion for the year.

However, MPs cut the overall budget to $508 billion due to worries that they would be fueling inflation. They ultimately agreed to factor in $54 billion from price hikes and subsidy cuts.

The budget must now be approved by the Guardian Council, a constitutional watchdog, before becoming law.

Ahmad Tavakoli, a prominent Iranian lawmaker, said that the $54 billion was still too high, and that it would increase the economic strain on Iran’s 76 million citizens.

The government first began slashing energy and food subsidies in December, when Ahmadinejad argued that the country could no longer sustain the $100 billion per year that the government says the programmes cost.

Last year, the government earned $20 billion from slashing subsidies, and Ahmadinejad has vowed to eliminate all subsidies by 2013, the end of his term.

Under the subsidy elimination plan, the government says that some of the money that is saved is given back to the people through cash payments. Every Iranian currently receives about $45 per month to offset the rise in commodity prices.

Since the first cuts went into effect on December 19, 2010, petrol and bread prices have quadrupled.

Massoud Mirkazemi, the country’s oil minister, meanwhile, is to leave his post as a result of the oil and energy ministries merging, the semi-official Mehr news agency reported on Monday.

“After the government decided to merge the two ministries … Mirkazemi said goodbye to all his deputies today,” Mehr quoted an “informed source” at the ministry as saying.

“Therefore from tomorrow Mirkazemi will not be present at the ministry,” the source said.

Iran is the world’s fifth-largest exporter of crude oil, and the merging of the two ministries is part of a plan to cut the number of federal ministries from 17 to 21.

In a separate development, President Ahmadinejad announced that Iran would resume a process of talks on its nuclear programme with major powers in Istanbul “very soon”.

“I hope that this important [nuclear] issue will reach its final result in the [next] Istanbul talks,” Ahmadinejad told a press conference in Istanbul on Monday.

Ahmadinejad, in Istanbul for the United Nations Conference on the Least Developed Countries, said his country has “always been ready for talks”.

“We welcome the wish of the 5+1 Group to return to the path of  negotiations once again,” he added, referring to the five permanent members of the UN Security Council plus Germany. “We have always been ready for talks, and we are ready today.”

He said an official letter in this regard would be sent “soon” to Catherine Ashton, the EU’s foreign policy chief.

Ali Akbar Salehi, the Iranian foreign minister, had said at the end of a meeting with his European Union counterpart in February that further meetings would be taking place, but no date was set. The last round of talks in January ended with no agreement being reached.

Several United Nations Security Council resolutions have called for a halt to Iran’s nuclear programme, in order to enable talks to defuse Western suspicion that Iran is enriching nuclear fuel in order to be able to use it in weapons.

Iran denies this, saying that its programme is solely aimed at addressing the country’s energy needs. 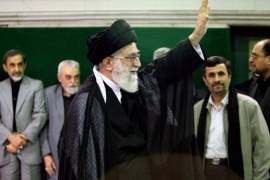 What does the rift between Mahmoud Ahmadinejad and Ayatollah Ali Khamenei mean for Iran? 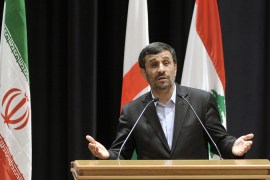 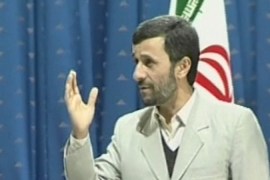 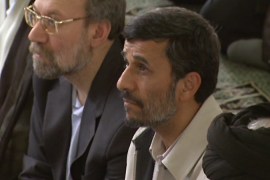 Iranian president criticised over absence from work and rift with minister.