Muammar Gaddafi, the Libyan leader, has held talks with Silvio Berlusconi, the Italian prime minister, in Rome as the two leaders celebrate the second anniversary of an Italian-Libyan friendship agreement signed in 2008.

An aide to Berlusconi said the two leaders met on Monday in the tent in which Gaddafi sleeps on foreign visits and that the two men were due to attend a formal dinner later on Monday to celebrate Italian-Libyan friendship.

The visit, Gaddafi’s fourth since the deal was signed, has caused considerable with concerns over Tripoli’s growing influence on the Italian economy and Gaddafi’s suggestion to a group of young women that they convert to Islam.

Economic ties between the two countries have developed strongly in recent times, and Italy, now Libya’s biggest trade partner, buys much of its oil and natural gas from the energy-rich North African state.

But there has also been criticism of Libya’s expanding interest in the Italian economy, with attention focused on the stake of some 6.7 per cent built up in UniCredit, one of the country’s biggest banking groups.

Politicians from the Northern League party, Berlusconi’s coalition allies who have frequently spoken out against foreign immigration, have criticised the investment and called on market regulator ConSob to investigate.

Following his arrival in the Italian capital on Sunday, Gaddafi gave a talk on Islam to several hundred young Italian women recruited by a modelling agency and paid to attend the lecture.

He handed out copies of the Quran and urged the women to convert, with participants saying that three young women had converted on the spot.

Al Jazeera’s Claudio Lavanga, reporting from Rome, said: “It is not the first time that he has done that, he did this in November, 2009 when he was in Rome.

“He invited 200 beautiful woman and he converted some of them into Islam even then.

“Three girls converted to Islam and the rest received money. This year, despite the controversy, he doubled the numbers and invited 500 woman instead and it did not go very well with many people, especially left-wing politicians.

“They called this religious prostitution, the fact that woman were paid to attend upset many.”

Opposition politicians have criticised Berlusconi over a recent deal under which Libya has agreed to take back illegal immigrants trying to sail to Italy from its ports.

The Libyan leader’s visit has been the subject of much uncertainty, and his arrival date was changed twice.

Along with his tent, Gaddafi has brought 30 horses to take part in an equestrian show on Monday.

Under the 2008 friendship agreement, Berlusconi agreed to pay $5bn in reparations for damage inflicted during Italy’s colonial rule over Libya in the early part of the 20th century. 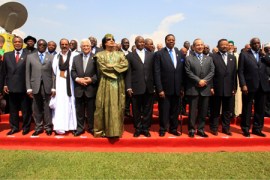