The Greek parliament has approved a 2011 budget that imposes yet more austerity on the debt-choked nation, hours after thousands took to the streets shouting, “We can’t take it anymore.”

The bill, passed on Thursday, targets a budget deficit of 7.4 per cent of GDP next year, down from about 9.4 per cent this year, through more spending cuts and tax increases, in order to put Greece in line with terms of the bailout that saved it from bankruptcy in May.

The new spending cuts and tax rises in next year’s budget build on an estimated 6 per centage points reduction of deficit in 2010.

“Truly, we have been through hell in 2010. But we have remained standing, and our consistency is being rewarded,” George Papandreou, the Greek prime minister, said.

“Today we are dealing with the debt issue (in a manner) that is sensible, systematic, and organised.”

The budget was approved on a strict party-line vote by the 156 ruling socialist party lawmakers in the 300-strong parliament.

But Greece is still set to miss its 2010 fiscal targets and the new measures have failed to calm fears about its ability to pull itself out of its crisis.

Fitch agency said that it may cut the country’s credit rating next month to junk.

The leader of the main opposition party, the conservative New Democracy, told parliament that the 2011 budget and the European Union/International Monetary Fund  (EU/IMF) bailout would fail.

“PASOK (the socialist party) is lying when it says that the memorandum will take the Greek economy out of the crisis. It will deepen the crisis,” Antonis Samaras said.

“The government’s policy is reducing GDP more than it reduces the deficit.”

And Greece’s lenders say it is broadly on track with fiscal consolidation plans.

But partly as a result of the measures, the economy is forecast to shrink 3 per cent next year after a 4.2 per cent drop in 2010, with unemployment jumping to a record 14.6 per cent from an estimated 12.1 per cent this year.

Public transport grounded to a halt in the capital Athens on Wednesday as about 3,000 protesters rallied peacefully in front of parliament to protest against wage cuts in the public sector and other steps meant to help stem a crisis that has shaken the eurozone, spread to Ireland and threatens others like Portugal.

“We have no hope, we are just drowning,” said Apostolos Kostopoulos, 46, a Public Power Corporation technician whose salary was cut.

“Parliament is voting today on a budget that will plunge people deeper into poverty,” he said as others waved a large Greek flag covered with “For Sale” tags.

Another 2,000 people joined a separate anti-austerity march, but overall turnout was much smaller than in previous protests.

Athens bus and subway drivers have been holding on and off strikes for two weeks and did not work at all on Wednesday, keeping Christmas shoppers from the city centre and adding to the strain of recession-hit retailers.

So far, the Greek government has failed to boost tax collection as much as targeted, despite a hefty sales tax increase.

The socialists, who revealed a gaping budget deficit after coming to power last year, have braved public discontent and taken draconian measures to meet the EU/IMF rescue terms.

This year already, the government has cut public sector wages by about 15 per cent, increased the retirement age, frozen pensions and cut public spending. 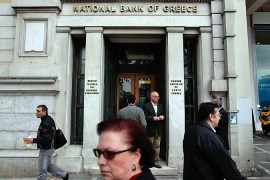 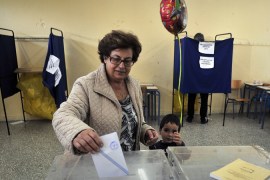 With 99.6 per cent of votes counted across the country, the ruling party won eight of 13 races for regional governor. 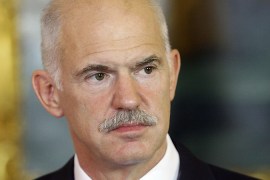 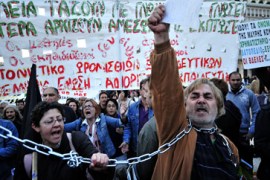