Spain should make tougher pension and labor reforms to revive economic growth and ease the debt load that is putting it at the heart of Europe’s debt crisis, the OECD said on Monday.

The Spanish government says that next month it will approve a highly contested plan to raise the retirement age gradually from 65 to 67, part of a drive to shore up public finances.

But the Organisation for Economic Cooperation and Development said in a report that Spain should consider raising the retirement age even further by indexing the age to life expectancy increases.

The government is considering extending the period of a person’s working life used to calculate retirement pensions. It is now the last 15 years.

The OECD says people’s entire working life should be used in the calculation, a move that would reduce the average monthly pension.

The OECD, which represents the world’s developed countries, also urged further labor market reforms. It said Spain needs to encourage firms to hire and stimulate an economy struggling to recover from nearly two years of recession triggered by a 2008 property bubble burst.

Measures passed in recent months make it easier and cheaper for companies to lay off workers, doing away with a system that provided some of the most generous severance payments in Europe.

The Paris-based OECD said that if these do not manage to boost hiring, the government should consider broader measures to make the labor market more flexible.

“We recommend that the government try to shed light as quickly as possible on the actions it intends to take in 2011, not wait until then,” Pierre Beynet, the OECD division chief, said.

“We also encourage government to take all necessary action to go beyond what was planned if economic growth deteriorates faster than forecast, which means of course that the government should not hesitate to increase taxes if that’s necessary,” he said.

The Spanish government said Monday that regional administrations – whose finances are a worry as Spain struggles to reduce its deficit from 11.2 per cent of gross domestic product (GDP) last year to the EU limit of 3 per cent in 2013 – are set to meet their targeted cuts this year.

Through the third quarter, their combined deficit was 1.24 per cent of Spain’s GDP while the forecast for the full year 2010 is 2.4 per cent of GDP, Elena Salgado, the finance minister, said.

The OECD said that if Spain’s deficit-reduction measures fail to meet targets the government should consider raising value-added taxes (VAT) on some goods and services. 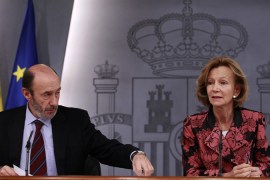 A look at how the European debt contagion spread from southern Europe and by 2010 had engulfed much of the continent. 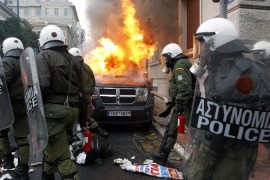 Austerity: from suites to streets 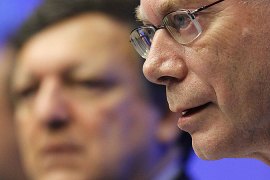 Bloc says it must do “whatever is required” to protect the shared euro currency following two-day summit in Brussels.