An oil pipeline has exploded in central Mexico, creating a “river of fire” and killing 27 people, a local official said.

The pipeline maintained by state oil monopoly Petroleos Mexicanos (Pemex) exploded just before 1200 GMT in San Martin Texmelucan, a small community in the state of Puebla about 75km east of Mexico City.

“Several streets were flooded with fuel. With a spark, there was a river of fire,” Valentin Meneses, the interior minister of the state of Puebla, said.

Pemex said the incident was under control and that an illegal fuel tap was suspected as a possible cause.

“They lost control because of the high pressure with which the fuel exits the pipeline,” Meneses said, adding that the oil began to flow down the city’s streets and into a nearby river.

Civil protection authorities, firefighters and military officers were investigating and trying to ensure there are no more explosions. No one has been detained.

Oil thieves in Mexico tap remote pipelines and sometimes build their own pipelines to syphon off hundreds of millions of dollars’ worth of oil each year.

The explosion occurred in a residential neighbourhood far from major oil refining or transportation facilities, according to local media reports.

Photos and video from the scene showed charred vehicles, burned-out homes and scorched ground around the moderately populated outskirts of the town.

A cloud of thick, black smoke was seen over the accident site just after dawn. 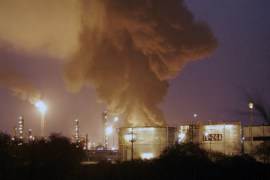