As countless economies around the globe entered 2010 on shaky footing after the Great Recession, a number of major European countries feared a spreading sovereign debt crisis.

The most affected countries included European Union (EU) members Portugal, Ireland, Italy, Greece, and Spain (PIIGS), as well as the UK and Belgium, to a lesser extent.

Confidence in these previously strong economies began to unravel, and wealthier economies such as Germany felt increasing pressure to rescue their fellow EU nations.

Europe’s debt crisis initially focused on Greece, for whom the Eurozone and the International Monetary Fund (IMF) issued a May 2 loan of $146bn on condition of harsh austerity measures.

On May 9, European finance ministers agreed on a $600bn lending vehicle – the European Financial Stability Facility (EFSF). And most recently, Ireland has agreed to receive an $89bn EU/IMF bailout, as analysts continue to worry about the 16-nation Eurozone’s long-term economic health.

The bottom line is that leaders – faced with financial and demographic obstacles – are being forced to raise taxes, cut spending, and figure out a way to ensure future economic prosperity.

Greece’s economy, like many others in Europe, expanded consistently from 2000 to 2007, and strong GDP growth allowed the government to run large deficits.

At first, currency devaluation facilitated heavy borrowing, and then Greece was able to continue borrowing due to relatively low interest rates on government bonds.

But the global financial crisis of 2008, considered by many the worst since the Great Depression, had a severe impact on Greece. The tourism and shipping sectors suffered big losses from the downturn.

The southern European country had misreported economic numbers to hide the true cost of government borrowing, which had been enabling high expenditure levels. Greece massaged statistics in order to fulfill European monetary guidelines, a phenomenon also seen to a lesser extent in Italy.

In 2009, Greece’s government revised upwards its budget deficit from six per cent to 12.7 per cent – far higher than the EU limit of three per cent. By May, the deficit was estimated at 13.6 per cent – one of the world’s highest deficit levels relative to gross domestic product (GDP). Greek public debt rose to $287bn by January 2010, close to 120 per cent of GDP.

The Greek parliament passed a budget bill on March 5, hoping to slash spending by over $7bn, with a variety of austerity measures, including government wage cuts.

The Greek debt rating was downgraded to the first levels of “junk” by April 2010, as investors feared government default that could gobble up their money. Then analysts expressed scepticism about Greece’s ability to re-finance its debt, and stock markets worldwide reacted unfavorably.

After the Greek government requested that an EU/IMF bailout be activated, a loan agreement was made on May 2.

Subsequently, Greece imposed a fourth and final round of austerity cuts, including more public sector wage reductions, as well as increased value-added (VAT), luxury, and corporate taxes. The bill also included pension cuts and an increase in the retirement age. A nationwide strike on May 5 resulted in three deaths and more than 100 arrests.

Without a bailout agreement, Greece might have defaulted on some of its debt, effectively removing the country from the euro – due to a lack of collateral with the European Central Bank.

Some critics of the bailout argue that – while borrowing costs for the Greek government are lowered in the medium term – tighter fiscal policy and social disruption have a negative net long term effect.

If the bailout had not been delivered, the impact of a Greek default might have been relatively small, since Greece is only 2.5 per cent of the Eurozone economy. But a default would have shaken investors’ faith in other Eurozone economies with debt problems, mainly Ireland and Portugal.

The Greek crisis has significantly reduced confidence in several other European economies with high government deficits (in 2009), including Ireland (14.3 per cent of GDP), UK (12.6 per cent), Spain (11.2 per cent), and Portugal (9.4 per cent).

Ireland was the second eurozone country after Greece to be bailed out by its partners in Europe and the IMF.

The country’s banking system, which had invested heavily in a property boom that later collapsed, was subject to a “fundamental downsizing” following the bailout.

On November 24, the Irish government presented a four-year austerity plan outlining $20bn in savings, a key step towards securing aid from the EU/IMF.

The plan included thousands of public sector job cuts, phased-in increases in Ireland’s VAT from the current level of 21 per cent, and social welfare savings of $3.74bn by 2014.

At this point, analysts say defaults in large Eurozone economies of Spain and Italy are somewhat unlikely, since their fiscal situations are relatively more stable, and Spain’s debt is just 53 per cent of GDP.

Just after the creation of the EU’s emergency rescue fund in May 2010, Spain instituted a new round of austerity measures to bring the deficit under control.

The socialist government had wanted to avoid deep budget cuts, but lower-than-expected economic growth and international pressure compelled the government to deepen cuts from January 2010.

Similarly, the Italian parliament approved an austerity package worth more than $32bn in July aimed at cutting the country’s budget deficit and reassuring financial markets.

The measures sought to bring Italy’s budget deficit under three per cent by 2010 from 5.3 per cent in 2009.

Portugal’s parliament approved a budget on November 26 aiming to reduce the deficit from 7.3 per cent of the country’s 2010 GDP to 4.6 per cent next year, requiring savings of around $6.85bn through a combination of slashed spending and tax hikes.

Portugal’s high debt and low growth have alarmed investors, fueling speculation it may be the next European country to need a bailout, after Greece and Ireland.

But the government has repeatedly stated that it does not want or need international financial assistance of that magnitude.

However, some analysts have said that in order for Spain, the fifth largest EU economy, to avoid problems, Portugal should accept a bailout sooner rather than later.

And France, while in relatively decent financial shape, has struggled to contain an outpouring of public anger over budget-trimming measures, including an increased retirement age and major pension cuts.

Britain announced in October that it will cut 490,000 public sector jobs over four years, with austerity measures designed to reduce the country’s record deficit.

The $130bn in decreased expenditures by 2015 – the deepest cuts in 60 years – aims to reduce Britain’s deficit of 11 per cent of GDP to around two per cent within five years.

Belgium, the host nation of the EU, is also struggling with major financial problems. Belgium’s public debt stood at 100 per cent of GDP in 2010, the Eurozone’s third highest after Greece and Italy.

Inconclusive June elections have meant no government budget for 2011, as French and Flemish language groups remain unable to compromise on how to deal with the economy.

Some financial analysts have said that Belgium could be the next country to take a major hit from the financial crisis, as borrowing costs increase. However, the government deficit is relatively manageable, and Belgian bond yields are below those of other highly indebted Eurozone nations.

The Scandinavian island nation of Iceland – neither of member of the EU nor the Eurozone – experienced the failure of its banking system and a major economic crisis, after all three of the country’s main commercial banks collapsed in late 2008.

Relative to the size of the Icelandic economy, this collapse was the largest in economic history.

In the last two years, Iceland’s currency, the krona, has fallen dramatically, and the market capitalisation of the stock exchange has dropped more than 90 per cent. Consequently, Iceland is in the midst of a severe recession, with a GDP decrease of 5.5 per cent in the first half of 2009.

Icelandic companies have suffered from major restructuring and a decrease in consumer demand. Importers have been hard hit, and pension funds have experienced large losses. Iceland’s prime minister, has sought full EU membership to stabilize the economy and combat unemployment.

The pressure on European lawmakers to find a better solution to the crisis is increasing, as economists warn about the adverse effects of unsustainable debt burdens.

A round of fresh austerity protests kicked off across Europe on September 29, and demonstrations have continued throughout autumn. December 15 was slated to be a day of coordinated anti-austerity throughout the continent, but Greek protesters again proved to cause the most significant disruption.

The EU has moved slowly to implement crucial new policies that could help prevent future crises.

Some financial leaders have called for the EU to increase the size of its bailout fund and to issue pan-European bonds to boost confidence in the Euro.

Others have made the case for a partial restructuring of public debt in Greece, Ireland and Portugal, as well as stronger guarantees for the bonds of stable countries.

Critics of the Eurozone response to the financial crisis have questioned both the efficacy and the social cost of austerity measures. Some experts actually argue that increased spending – rather than cuts – is more appropriate for certain economies.

And in many countries, sceptics say that the working population should not bear the brunt of crises brought on largely by the mistakes of bankers and investors.

Other international criticism stems from doubts about the clout of credit-rating agencies. A new European ratings watchdog could stem the influence of the private US-based agencies such as Moody’s, S&P, and Fitch.

At the very least, officials have called for the regulatory body to roll back the power of these agencies, in addition to curtailing the power of financial speculators.

Some Eurozone leaders, especially in Greece and Spain, have even said the debt crisis itself was politically and financially motivated.

Spanish officials have pledged to investigate the role of the “Anglo-Saxon media” in fomenting the crisis, supposedly in order to move capital away from the euro so that the US and UK can continue to finance large external deficits by running big government deficits.

Eurozone economies have limited capacity to inject liquidity into their economies, unlike the US, whose Federal Reserve has been jumpstarting the economy since 2008 by printing new money and purchasing government securities.

But recent austerity measures in the UK – and imminent cuts in the US – may show that no nation is immune to belt-tightening budget measures in a highly uncertain global financial climate. 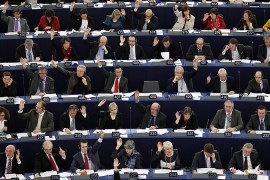 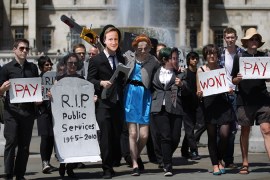 As protests against government spending cuts intensify, we look at the future of the European welfare state. 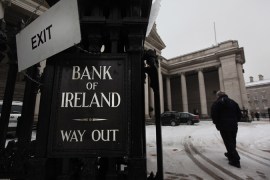 Christine Lagarde, the French finance minister, talks about the financial crisis in Europe. 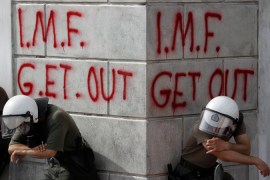 Gordon Brown and John Bruton explain why they think teamwork is essential if Europe is to overcome its woes.